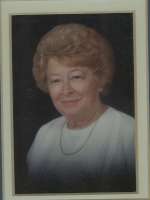 Born and married to Arizona pioneer families, Lois Humphrey Bonsall died peacefully at age 90 on October 19, 2010. She was an adored wife, mother, grandmother and friend. All who met her liked her; she embraced them with a loving heart, a kind word and an unforgettable smile. Hers was an upbeat and cheerful orientation to life. She met life’s challenges with strength and faith and a positive disposition.

Lois was raised in the Phoenix Palmcroft neighborhood. She attended Kenilworth Elementary and Phoenix Union High School, where she was active in student government and proudly graduated as the salutatorian of her class. She then attended Phoenix Junior College to meet her “soulmate” and the great love of her life, Harry Bonsall, Jr. They were subsequently married and completed their studies together at the University of Arizona.

While the men in her families were deeply involved in Arizona agriculture, Lois’ love of education was inherited from her mother, who was among the first female graduates of Arizona Teachers College (now ASU). Following her own graduation, Lois moved to Glendale and began teaching at the local grammar school. Her career was interrupted by the births of four children and by raising them to young adulthood. But, she loved children and teaching and returned to the classroom to excel and to become a beloved third grade teacher to hundreds of west side children.

Lois was active in numerous Glendale school, church and social organizations. Children were the main focus of her caring. Among many of her sponsored activities, Lois’ annual Easter Egg party is a fond memory to a generation of Phoenix and Glendale youth.

With Harry, she maintained a lively network of friends that worked, played, partied and prayed together all across Arizona and Mexico. They became, upon its founding, active participants in the Church of the Beatitudes. They cherished their many friendships, some of them multigenerational, admonishing their children and living the message: “To have a friend, you must be a friend.”

She is survived by four children … Harry III (Gena), Mary Ann (Jim O’Neil), Bill (Nancy) and Mark (Mary). Eleven grandchildren, three great grandchildren, two sisters-in-law and many nieces and nephews also survive her loss. She will be laid to rest next to our father in a Private Graveside Service.

Her family is grateful for the many legacies Lois’ rich and long life has left: The beauty of the union between her and our father, genuine friendship, respect for each person, loving and gracious ways, affirming praise, great faith and good example.

We also gratefully acknowledge the extraordinary, affectionate care and support to our mother by Hospice of the Valley. And, similarly, we thank the Beatitudes Campus of Care.

Offer Hugs From Home Condolence for the family of BONSALL, LOIS HUMPHREY