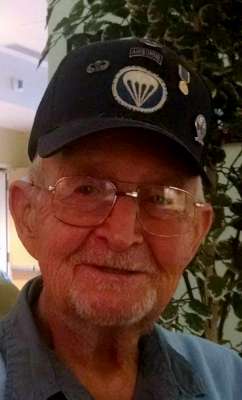 Earl (Dan’l) Edward Boone of Tempe Arizona went home to our Lord on May 23rd, 2016 at the age of 92.  Dan’l was born in Sullivan, Indiana to Joseph and Nancy Boone, was preceded in death by his loving wife of 70 years, Veva Boone and is survived by his daughter Cheri Pittman, 3 grandchildren, and 5 great grandchildren. Dan’l served as a highly decorated Staff Sergeant during WWII in the United States ARMY from 1943-1945.  He served as a paratrooper in the 517th Parachute Regimental Combat Team and the 505 Parachute Regiment of the 86th Airborne.  During his service Dan’l fought in five major battles which included the Battle of the Bulge and Anzio.  He earned numerous medals which included; 5 Bronze Stars, 3 Purple Hearts with Oak Leaves and 2 Croix De Guerre.

After serving in WWII Dan’l moved to Arizona with his wife where he focused on his family and a career as a salesman.  He was an active member of the Elks Lodge for 62 years during this time he helped to establish the Tempe Elks Lodge. Dan’l will be greatly missed by both his family and friends.  He was a man of integrity, deep faith, and an unending love. The family request, in lieu of flowers, that memorials be directed in his name to The Hospice of the Valley, https://www.hov.org/donate.  A funeral Service is to be held at 9:00 AM, Tuesday June 7th, 2016 at Whitney & Murphy Funeral Home, 4800 E Indian School Rd. Interment will be held at 11:00 AM at The National Memorial Cemetery, 23029 N Cave Creek Rd, Phoenix, AZ 85024.  Reception to be held at the Tempe Elks Lodge at 1:00 PM, 2320 S Hardy Dr, Tempe, AZ 85282.

Offer Hugs From Home Condolence for the family of BOONE, EARL