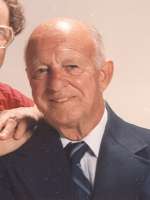 91, went to be with our Lord on July 30, 2011. Vince was born on July 18, 1920 in Erie, PA. He was one of ten children. Survived by his beloved wife of 67 years, Clementine, daughter Patricia Zarlengo; son Mark Borkowski; grandchildren Alfred Zarlengo, Jr., Nicolle Merlo (Tony), Troy Borkowski (Maria), Philip Zarlengo, Chad Borkowski (Ana) and Kyle Borkowski; great-grandchildren Alexa Zarlengo, Alicia Merlo, Livia Zarlengo, Vincent Merlo and Georgia Borkowski. He had a great love for his family and enjoyed fishing, especially with members of his family. He taught all of his grandchildren how to fish. He was retired from Motorola. Rosary will be at 10am with a Memorial Mass at 10:30am, Monday, August 8th, 2011 at St. Thomas the Apostle Catholic Church, 2312 E. Campbell Avenue, Phoenix. Inurnment will follow at St. Francis Catholic Cemetery.

Offer Hugs From Home Condolence for the family of BORKOWSKI, VINCENT WALTER