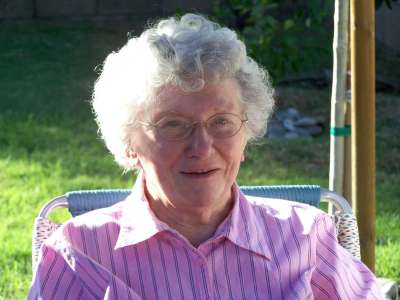 Genevieve K. Borselli, 96, of Phoenix, Arizona died peacefully on Saturday July 19, 2014. She was born on November 12, 1917 in Chicago, Illinois to Frank & Josephine Kruk, but raised on a farm in Michigan where her mother married John Kiss after Frank Kruk passed away. This is where her love of gardening and outdoors started. Wherever she lived, she had a garden and was an active member of the Cooperative Extension. Always the adventurer, she wanted to travel and signed on with the Dept. of the Army in 1947 as a civilian secretary to an AF Colonel in Seoul, Korea where she met the love of her life Arthur A. Borselli, a Lt. in the Air Force. They spent their years traveling the world, finally retiring in Phoenix in 1964, where her many talents were given to her church, St. Theresa’s as a CCD teacher, Sodality member, Legion of Mary and aid to many parishioners in need. She is preceded in death by her husband Arthur and her sisters, Laura, Jeanette, Mary and Frances. All the ciotka’s are now together in Heaven.

She was an amazing teacher, not only to her four children, Sharon (Tim) Hunnicutt, Greg (Sheri) Borselli, Larry Borselli and Karen (George) Gibbs, but also her 7 grandchildren and 4 great grandchildren, 32 nieces and nephews and the many children that she taught CCD to for over 27 years.

Offer Hugs From Home Condolence for the family of BORSELLI, GENEVIEVE KISS