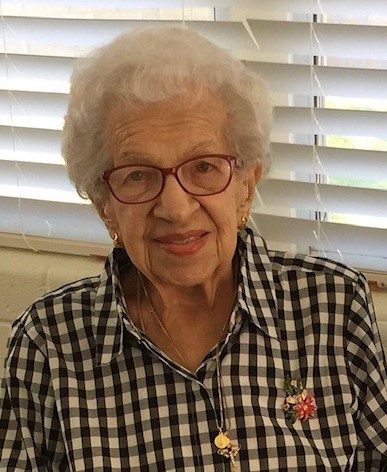 Evelyn Bory died on Tuesday, October 15, 2019. The longtime Scottsdale resident was 98. She was born in Chicago on September 27, 1921. She married Richard Bory on June 29, 1957, and the couple would have three daughters. In 1968, the family moved to Scottsdale, where Evelyn enjoyed being active in the community and at St. Maria Goretti Catholic Church. A dedicated mother, she involved her daughters in such activities as cooking, sewing, scouting, crafting, gardening, camping, swimming and religious education. At times she worked as a bookkeeper and at a fabric store while her children were in school. In the 1970’s, she returned to school and received an associate degree from Scottsdale Community College at age 60. She was a devoted wife to her husband until his death on November 20, 2012. In the lager years, she remained active with a close-knit circle of friends, and enjoyed creative cooking, studying genealogy and participating in holiday boutiques and church bingo.
She was loved by all for her sweet temperament, warm smile, welcoming demeanor and the pure joy she found in family and friends.
She is survived by her daughters, Joan Harnitchek, Carol Bory and Patti Cordova (Daniel), grandchildren, Sarah and John Harnitchek. She was preceded in death by son-in-law, John Harnitchek.
A Funeral Mass will be celebrated at noon Saturday, October 26, 2019 at St. Maria Goretti Catholic Church, 6261 N Granite Reef Road, Scottsdale, followed by a graveside service at St. Francis Catholic Cemetery, 2033 N. 48th Street, Phoenix.

Offer Hugs From Home Condolence for the family of BORY, EVELYN