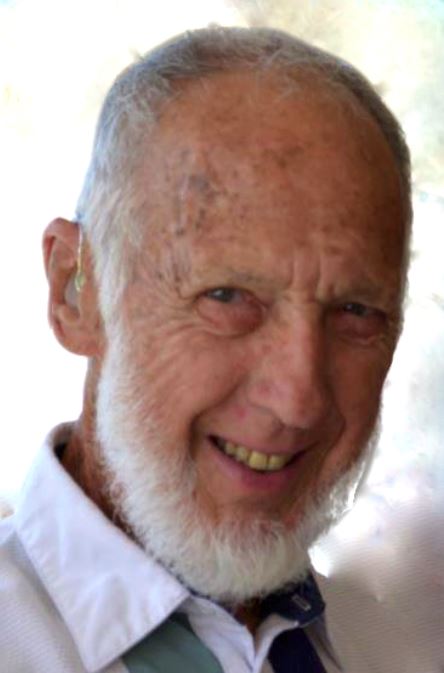 Bill’s battle with cancer and other complications ended on October 20, 2016. No words can express how much he will be missed. He lived a wonderful life and influenced so many people with his positive attitude, playful sense of humor, and intelligent advice. He was respected and loved by everyone who knew him.

Bill was born on June 28, 1930, in Miami, Arizona, to Marguerite and Luther Bowling. He spent a happy childhood with his mother and grandparents, Minnie and William Schultz. He adored his grandpa, who taught him how to build whatever he could imagine. Bill’s mother let him take apart everything from cars to clocks… as long as he put them back together. She said, “He was the sweetest little boy.”

In his teens, Bill had many escapades with his cousins and friends, quite a few involving hand-me-down Model T cars. The roads around Miami aren’t flat, so when the steering wheel comes off in your hands while you’re driving, it’s time to ditch it. In high school, Bill was a rascal as well as a bright student, and his senior year found him having to move from Miami High School to Globe High School. He always said this was the best thing that could have happened to him because it was there he met Jeanette Caretto.

Bill attended the University of Arizona, worked summers at the mine in Miami, served in the Army during the Korean War as an MP and technician at Sandia Base in New Mexico, and then returned to the U of A, graduating with a degree in Mechanical Engineering.

One summer in college, Bill and Jeanette renewed their friendship. They began dating, corresponded when they returned to school, and married on February 4, 1956. Bill said that Jeanette was the most beautiful woman he had ever known and that she had given him the one thing he wanted most — a loving, stable family of his own.

As newlyweds, Bill and Jeanette lived in California. When Bill joined GE’s Management Training Program, they moved to Illinois, where Alane was born in 1957. The program took them to New York, where Nina was born in 1959, and to Ohio, where John was born in 1962. Having enough of the East, the family moved to California, where Bill worked for Aerojet. In 1965, they returned to their home state and settled in Phoenix.

Bill worked in Manufacturing Engineering for the Government Electronics Division at Motorola until he retired, with a few notable detours, including a stint at Courier, where ultrasound was invented. Ultimately, he enjoyed the camaraderie of the engineering corps at Motorola. When Jeanette persuaded Bill to go to an opera with her, he complained to the guys at work. The next day, when the the guys asked him how it was, Bill replied, “It was a tragedy,” to much guffawing.

Living with Bill for 60 years was like earning several college degrees in a multitude of subjects. It wasn’t necessary for Jeanette to read the books herself as he summarized them for her and, as a result, she was much better informed about many subjects. “However, if I never hear another word about the Civil War, I will be quite happy.” Bill was a Renaissance man, interested in everything and capable of building and fixing anything. He held many original patents. When he received his first, Jeanette had the U.S. Patent Office letter engraved on a bronze plaque. They leaned it against a wall while deciding where to hang it, when the dog came along and lifted a leg on it. Bill observed with a grin, “Now there’s an honest critique.” According to Jeanette, “A day never went by that he didn’t do or say something that made me laugh.”

Bill enjoyed spending time with Jeanette and the kids; skiing at Sunrise, Tahoe, and Telluride; sailing at Lake Pleasant; and ice fishing at the family cabin at Hawley Lake in the White Mountains. In retirement, Bill kept in close touch with his friends, watching sports, golfing, and prospecting all over Arizona. He and Jeanette traveled throughout America, Europe, Australia & New Zealand, China, and French Polynesia. After their trip to China, Bill referred to it as “America Appreciation 101.” He also greatly enjoyed going on outings with his grandchildren, Meghan and Josh, whom he cherished.

Bill would want anyone who is diagnosed with a glioblastoma multiforme brain tumor to know that there is hope. Bill lived a year cancer free thanks to the complete removal of the original tumor by Dr. John Wanabo, and eight months more after recurrence. Bill researched non-standard treatments and tried only those with low toxicity and some empirical evidence of effectiveness.  He highly recommended Ben Williams’ book, Surviving “Terminal” Cancer. After the standard treatment nearly killed him, Bill followed his own regimen of very low level, continuous chemo (Temodar) along with the Asian cancer-treatment herb, Centella asiatica (Asiatic acid). His oncologist’s assistant was astounded when one tumor shrank and neither grew after recurrence. She said that she’d never seen GBM tumors do that… ever. Bill was correct when he said that he didn’t think it was the tumor that was going to kill him. As one of his favorite characters, Eliza Doolittle, might have said, “It was the complications that done him in.”

Bill’s survivors include his wife, Jeanette; his children: Alane, Nina, and John; Nina’s husband Michael; his grandchildren Meghan and Josh; Michael’s father, Richard; his friend and former son-in-law, Owen, extended family members in the United States and Italy; many friends; and his scruffy little tan dog, Annie. His family is grateful for all the love and support they have received. They thank Bill’s internist, Dr. Dana Paull, and his primary caregivers, Tom Gaitan and Paula Di Palazzo, for their compassion and professionalism, as well as the other caregivers, nurses, family members, friends, and neighbors who helped them and Bill.

Bill’s family will continue to live their lives as he lived his. The kindness and generosity he showed to family, friends, neighbors, and strangers are an example for us all. His stories, good humor, and unique character will live on in many people’s memories. He will always be in our hearts, always loved.

Offer Hugs From Home Condolence for the family of BOWLING, WILLIAM M.