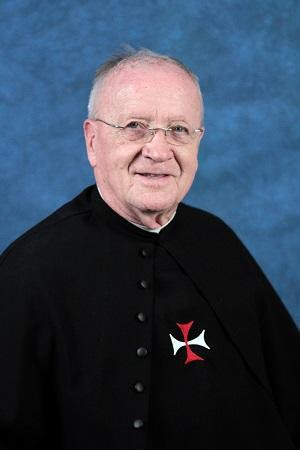 Br. Gus William Schloesser, osc
1941-2019
The Crosier Fathers and Brothers mourn the loss of our confrere. Br. Gus William Schloesser, osc, was born in Jordan, Minnesota, to John W. and Ida Rose (Bauer) Schloesser on May 23, 1941.
He died at the Banner University Medical Center in Phoenix on March 2, 2019. He was 77 years old.
He attended South St. Paul High School and Nazareth Hall Junior College in St. Paul, Minnesota, and earned a Pastoral Ministry Certificate from the College of St. Catherine, also in St. Paul.
Br. Gus, osc, joined the Crosiers as a novice in 1962 and made his first profession of vows March 19, 1963, in Hastings, Nebraska. He professed solemn vows in Onamia, Minnesota, in 1969.
His assignments and ministries centered around Crosier Religious Life as a member of the Crosier communities in Onamia, Hastings, Anoka, Shoreview and Phoenix, where he lived since 2004.
He served in many different capacities including director of food service for the Crosier Seminary in Onamia; director of the Christian Community Center in Fort Wayne, Indiana; associate vocation director and then province vocation director for the Crosiers; religious superior of the Crosier community in Shoreview; facilities director at Maryhill Retreat House in St. Paul; co-director of the Listening House in St. Paul; member of the Commission on Ministry for the Archdiocese of St. Paul and Minneapolis; Crosier alumni associate director; rector of the Crosier Generalate in Rome and facilities manager at Crosier Village in Phoenix. Br. Gus enjoyed volunteering at Huger Mercy Living Center and coordinating efforts to stock a food pantry at Roeser Senior Village Apartments, both in Phoenix.
Br. Gus is survived by his brothers Stan, Rod and Jack, his sister Doreen Yezek and their families; his Crosier confreres and numerous friends. He is preceded in death by his parents and brothers Kenny and Terry and sister Geri.
Funeral services will begin with the Reception of the Body at 3:30 p.m. Thursday, March 7, at the Priory Church of the Holy Cross Church at Crosier Village, 717 E. Southern Ave., Phoenix, Arizona 85040. Evening Prayer (Office of the Dead) will be prayed. Viewing of the Body will be from 4-6 p.m. with the Funeral Mass to begin at 6 p.m. A reception will immediately follow. A private burial at the Crosier Cemetery in Onamia, Minnesota, will take place at a later date.
In lieu of flowers, memorials are preferred to the Crosier Fathers and Brothers, P.O. Box 90428, Phoenix, AZ 85066-0428.
Condolences may be expressed at www.whitneymurphyfuneralhome.com