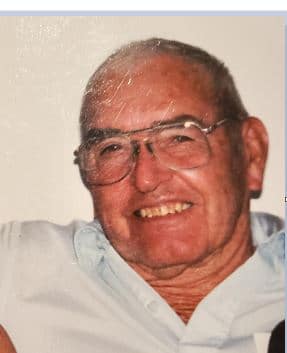 Arthur “Art” Lee Bradley, 94, passed away peacefully surrounded by his children on April 28, 2022.  Art was born in 1927 in Bloomington, Indiana to parents Ray and Wilma Bradley. The Bradley’s moved to the valley in 1937. Art attended Glendale Union High School and shortly thereafter began his life-long construction career. He married the love of his life, Helen Marie McCarley in 1946. Art and Helen were married for 62 years and raised their family in the Arcadia area.

As one of the oldest members of the local carpenter’s union, Art supervised the construction of homes, commercial buildings, medical buildings, schools, and banks throughout the state. After he retired, Art and Helen were park volunteers at Alamo State Park. They continued volunteering for nearly 20 years.

Art loved the outdoors. He was an avid fisherman, hunter, boater and all-around outdoor enthusiast. His love of the outdoors was passed down to his children and grandchildren. He also loved cars, motor sports, and tinkering with virtually anything with an engine.

A private, family celebration of life will be held at a later date. In lieu of flowers, the family requests that contributions be made to Hospice of the Valley, hov.org. Condolences may be expressed at www.whitneymurphyfuneralhome.com

Offer Hugs From Home Condolence for the family of BRADLEY, ARTHUR “ART” LEE