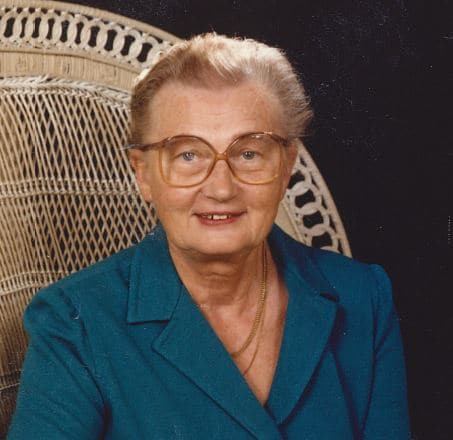 Margaret Rosalie Breitkopf passed peacefully from natural causes on May 31, 2022, three months shy of her 100th birthday. Margaret cared deeply for refugees having been one herself. She was born in Leuven Silesia, now part of Poland, on September 11, 1922 into a family that built high quality tractors. She described her hometown as idyllic until Russian soldiers invaded in 1945 sending her father off to die in prison camp, and their belongings taken or destroyed. Later taken over by the Poles, she was forced to flee along with her mother and five younger cousins who were put into her custody. They were refugees in their own country until she emigrated to America with her mother and brother in 1956.

Margaret arrived in the US with help from distant relative monks living at St. John’s Abbey in MN. Having attended a cooking academy in Germany prior to WWII, she started cooking for the monks. In 1970 she started a frozen foods company called Arden Foods, Inc. located in Minneapolis MN that grew to over 75 employees. She and her business partners sold the company in 1982 at which time she moved to Scottsdale where she has lived ever since.

Those fortunate enough to know Margaret enjoyed her marvelous cooking and hospitality, especially Thursday night beef stroganoff dinners and her secret bolillos recipe. She came to be an accomplished painter, potterer and jewelry maker, giving almost everything, she made to friends and relatives. Margaret was a faithful member of St. Theresa Catholic Church in Phoenix. She was preceded in death by her brother Walter Breitkopf (January 2022) and her mother Maria (1981) and her father Hermann (1945). A funeral Mass for Margaret will be offered at St. Theresa Catholic Church, 5045 E. Thomas Road, in Phoenix on Monday, June 6, 2022 at 10:00 am. Prior to the funeral Mass, a viewing will take place from 9:00-9:40 am at Whitney & Murphy Funeral Home, 4800 E. Indian School Road, Phoenix. Family would like to thank Maureen from St. Theresa’s for her friendship and devotion to Margaret, Daniel and Nicole from the Biltmore Care Home for the excellent care Margaret received. Condolences may be expressed at www.whitneymurphyfuneralhome.com

Offer Hugs From Home Condolence for the family of BREITKOPF, MARGARET ROSALIE