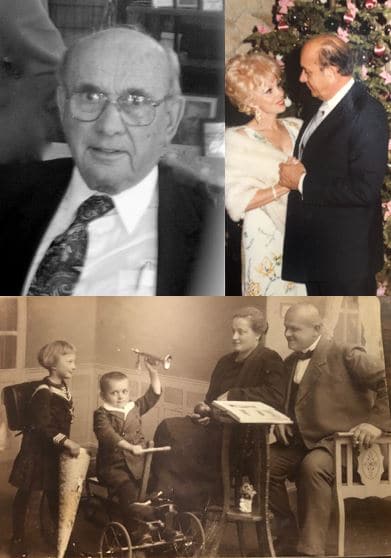 Walter Joseph Breitkopf, of Scottsdale, went home to be with his Lord and Savior Jesus Christ on January 28, 2022. Walter passed away at the Biltmore Home Care at 3532 E. Camelback, Phoenix Arizona, 85258. He was living at home for three years prior to a month at Biltmore Care.

On Thursday, February 3, 2022 a Visitation will be held at 11:00 am with Funeral Service beginning at 12:00 P.M. at Whitney & Murphy Funeral Home, 4800 E. Indian School Rd., Phoenix. Burial to follow at St. Francis Cemetery at 2033 N. 48th St. in Phoenix. In lieu of flowers, please make or gift in memory of Walter Breitkopf to The Hospice of the Valley.

I would like to share a little of Walter’s life with you. He was one of the most amazing men I have ever met. He was born into an amazing family. He was born during World War II.  The family witnessed Hitler and his army entering their small town of Lewin.

Hermann Breitkopf, Walter’s Father, was introduced to his wife Maria, by friends who owned the Jewish synagogue which was next to Brietkops’ factory and home.

Hitler and his army were one day away from Levin, when his friends that owned the synagogue came to them and asked them to buy the synagogue so they could have enough money to leave Lewin before Hitler and his army arrived and be arrested and sent to a concentration camp. Walter and his family helped them to get out of Germany.  If this wasn’t enough; later, the Russian army infiltrated Lewin and took over Walter’s home, they abused his sister and arrested his father several times. He had always come home afterwards, but this time he never came back. The family later learned that his father had been sent to Siberia where he died.
Walters’ sister escaped with several children that were her cousins crossing the country, hiding in monasteries until they reached a safe place.

Praise the Lord. We sometimes forget how blessed we are to live under the banner of freedom in America.

Walter and his family eventually became citizens of the United States. His sister started a frozen food chain who later sold it to Michelin; and Walter started a tool and dye factory, ACROLOC Bayer Industries Inc., Phoenix, Arizona. Both siblings were hard workers; and they became very successful. Walter was always helping someone. Walter is one of the kindest people you would ever want to meet. Years later, Walter happened to meet a man who was part of the Russian Army. They talked about these difficult times. They had a mutual forgiveness.

A year ago, Walter would tell us he would see angels at night when he went to bed.

God Bless Walter my stepfather and his family for the love they showed to others.

He is home now enjoying his eternal benefits and rewards. He is no doubt meeting up with his loved ones. My beautiful mother, and his precious father Hermann.

Offer Hugs From Home Condolence for the family of BREITKOPF, WALTER JOSEPH