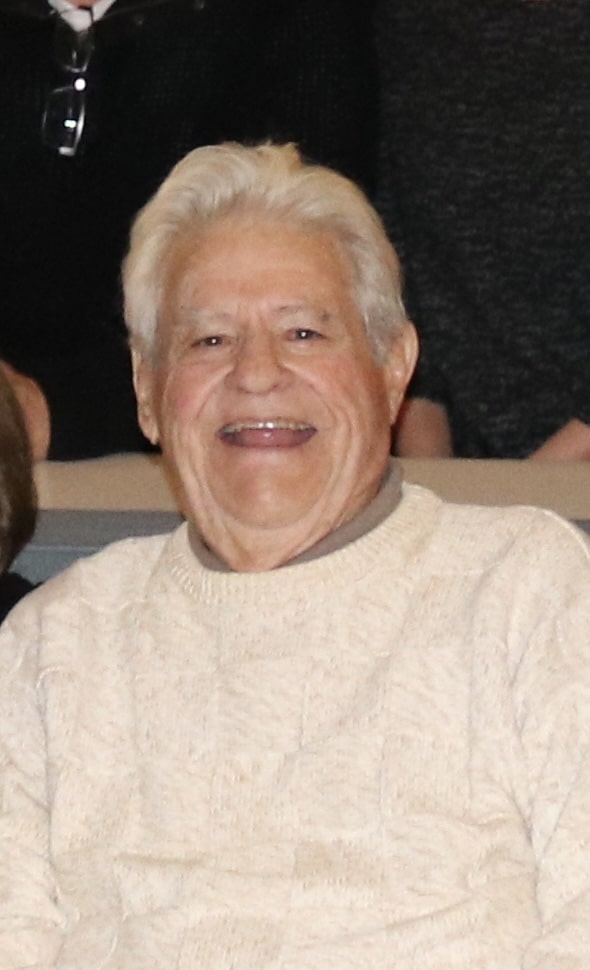 Dominic John Briguglio went to the Lord on April 5, 2021 at 6:15pm. At his side were his wife of 62 years Mary Elizabeth, his children Michael, Cheryl, Dominic, and Karen, his sister Roseann and his brother John.
Dominic is survived by his wife Mary, his children, Michael (Jeanine) Briguglio, Cheryl (Thomas) Oldani, Dominic Briguglio II, Karen (Mark) Perko, his brother John Briguglio and his sister Roseann Henson. In addition he is survived by his grandchildren Michaela Oldani, Haley Perko, Desiree Oldani, Samantha Briguglio, Erin (Sean) Guthrie, Megan (Max) Stieben, Madeline Briguglio, Dominic Briguglio III, Luke Briguglio, and Diana Briguglio, and many nieces and nephews.
Dominic was born in Detroit, Michigan on October 13, 1933. He graduated from Saint Charles High School in 1951 where he played football, basketball and baseball. Upon graduation he played semi-professional football for the Dearborn All Stars. He remained an avid sports enthusiast the rest of his life; bowling, playing softball, playing bocce, and playing golf. Dominic was also a top notch youth football, basketball, and baseball coach, touching many young men’s lives extending beyond the field or court.
A master woodworker, Papa made many useful items for his home, his children and his grandchildren. We are all in possession of the patented M & M dispenser; one which we all still use on a regular basis.
Dominic worked for Chrysler Corporation as a Tool Engineer for 37 years, retiring in 1988. Upon retirement, He and Mary moved to Scottsdale Arizona, where he enjoyed 32 years of retirement, traveling the country attending grandchildren’s births, baptisms, confirmations, high school and college graduations, weddings and sporting events.
Dominic was an avid University of Michigan Football Fan, holding season tickets for many years, tailgating with Mary, Ronnie and Roseann and countless U of M students who would stop by many years after Mike graduated.
Dominic was the consummate family man whose favorite mantra was “Come early, stay late…”He loved to visit with friends and family for any occasion possible. Any party that he and mom hosted always had enough food left over to eat for a week.
Dominic was an example of love through and through, and epitomized the loving characteristics that he learned growing up in a close knit family of 12. He was also a man of principle, as evidenced by the following poems he held in his wallet for over 50 years. God Bless You Boz, Dad, Papa, Dominic. We love you with all our hearts!

A Rosary will be recited in honor of Dominic beginning at 10:00 am with a Funeral Mass to follow at 10:30 am on Tuesday, April 13, 2021 at St. Maria Goretti Catholic Church, 6261 N Granite Reef Rd., Scottsdale, Arizona. Interment to follow at St. Francis Catholic Cemetery.

You got it from your father. ‘Twas the best he had to give. And right gladly he bestowed it. It’s yours, the while you live. You may lose the watch he gave you-another you may claim, but remember, when you’re tempted, to be careful with his name. It was fair the day you got it, and a worthy name to bear. When he took it from his father, there was no dishonor there; Through the years he proudly wore it, to his father he was true, and that the name was clean and spotless when he passed it on to you. Oh, there’s much that he has given that he values not at all. He has watched you break your playthings in the days when you were small. You have lost the knife he gave you, and you’ve scattered many a game, But you’ll never hurt your father if your careful with his name. It is yours to wear forever, yours to wear while you live. Yours , perhaps, some distant morning, to another child to give. And you’ll smile as did your father- with a smile that all can share- if a clean name and a good name you are giving him to wear.

What does a father say to his child before their first game?

This is your first game. I hope you win. I hope you win for your sake, not mine. Because winning is nice. It’s a good feeling. Like the whole world is yours. But it passes, this feeling. And what lasts is what you’ve learned. And what you learn about is life. That’s what sports are all about. There’s no telling how you’ll do. You might be a hero, or you might be absolutely nothing. There’s just no telling. Too much depends on chance. Or how the ball bounces. I’m not talking about the game, I’m talking about life. But it’s life that the game is all about. Just as I said. Because every game is life. And life is a game. A serious one. Dead serious. But that’s what you do with serious things. You do your best. You take what comes. You take what comes and run with it. Winning is fun. Sure. But winning is not the point. Wanting to win is the point. Never be satisfied with what you’ve done is the point. Never letting up is the point. Play to win. Sure. But lose like a champion. Because it’s not winning that counts. What counts is trying to be the best you can be.

Offer Hugs From Home Condolence for the family of BRIGUGLIO, DOMINIC JOHN