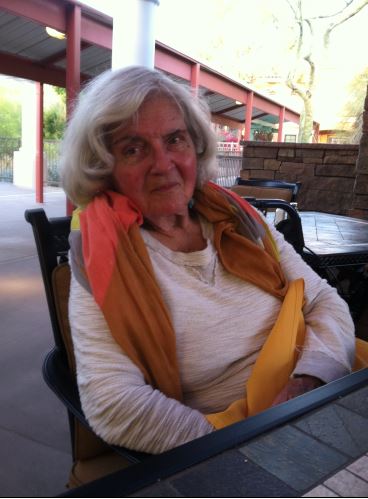 In remembrance of Joan Roberta Mills Brown born August 27th, 1924 in Chicago, Illinois to William Robert “Bob” Mills and Betty Lehnert Mills. Joan grew up during the Great Depression, but her family was fortunate in that Bob had steady employment as a department store manager with SS Kresge Company.

She graduated from Shorewood High School in Milwaukee, Wisconsin at age 16 during the onset of WW II. Joan wanted to follow in the footsteps of her father, a member of the 1st Marine Corp Aviation unit in WW I, but at the time was too young to enlist. So she managed the Mills Mobil Gas until turning 18, when she enlisted in the U.S. Navy. Stationed at the San Diego Naval Hospital, Joan served honorably and rose to Pharmacists Mate 1st Class.

After the war Joan met and married Caspar Brown Jr.  She and Cap eventually settled in Springfield, Illinois where they had 5 children in an 8 year span from 1952 through 1959. In 1964 Cap and Joan packed all 5 kids and the family dog into their Pontiac station wagon and headed west. They settled in the then unincorporated area of Moon Valley, just outside Phoenix. For the next 21 years, due primarily to Joan’s selfless and joyful efforts, the Brown household became the “go to” spot for what seemed like an entire generation of kids. Certainly Joan had her hands full with her own brood, where at times she was literally up to her elbows in pots and pans, but she always made room at meal times for any and all of her 5 children’s friends. Her cooking was legendary, and so they came by the carload.  Thanks to Joan, they always left with a full stomach and a rosier outlook on life. Joan lived a total of 44 years in and around the Moon Valley area.

Joan was an avid and excellent bridge player and loved card games of nearly all types.  She was a devoted sports fan with a particular affinity for the Phoenix Suns and various top notch tennis stars. She was a voracious reader, devouring a thousand volumes of all types of literature, history, and novels. And being a great cook, of course, she loved good food. Her girls only lunches at Chez Louie and Trader Vic’s are legendary. But most of all Joan was that rare breed that complained little and did much. She was irrepressibly convivial and genuine to the core. She profoundly affected all whom she encountered with a joie de vivre that was uniquely hers. She was uncommonly kind and caring and she will be sorely missed and fondly remembered.

In celebration of Joan’s wonderful and remarkable life there will be an open house for family, friends, and acquaintances on Sunday, October 19, 2014 from 2-5 pm at The Terraces, 7550 N. 16th Street in Phoenix.

Offer Hugs From Home Condolence for the family of BROWN, JOAN ROBERTA MILLS