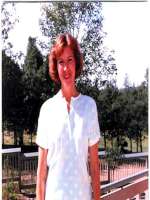 68, passed away unexpectedly at her home in Scottsdale, AZ on August 22, 2010. She was born in Lynn, MA on January 29, 1942 and was raised in Hinesburg, VT. Her parents, Robert L. and Beatrice Brown, have predeceased her. Beloved Margaret is survived by her brother and sister-in-law, Robert C and Wendy L Brown, of Tucson AZ and her sister, Edith A Brown, of Burlington, VT. She is also survived by Edith’s daughter, Julie Alden, of Essex Jct., VT; and Robert’s son and daughters: Curtis Brown and family of El Dorado Hills, CA; Stephanie Pizzagalli and family of Charlotte, VT; Christy Dawson of Vergennes, VT; and Kelly Brown of Chandler, AZ.
Margaret received her BA degree from the University of Vermont; her Masters in Urban Planning from Columbia University in New York City; as well as a Masters in Social Work from Fordham University in New York City. After receiving her degree in Urban Planning, Margaret worked for HUD in New York City for 20 years. She has since been a certified Psychotherapist and has worked in New York, New Jersey and Connecticut and has had a private practice in Scottsdale, AZ since 1995. Margaret has been a volunteer with the Children’s Aid Society; Shelter for Battered Women and Children in Newark, New Jersey. She also worked as a tutor and counselor in the East Harlem Tutorial Center in New York City. Margaret will be greatly missed by all her loving family, friends and clients she has worked with all over the United States. There will be a Celebration of Life service at 11:00 AM, at Whitney & Murphy Funeral Home, 4800 E. Indian School Rd, Phoenix, AZ on Friday, September 24, 2010. In lieu of flowers, the family is requesting contributions be made in Margaret’s name to The Foundation for Global Harmony at www.cealo.net; or Lauren’s Institute for Education (LIFE) for autistic children at www.laurensinstitute.org; or to a charity of choice.

Offer Hugs From Home Condolence for the family of BROWN, MARGARET F.