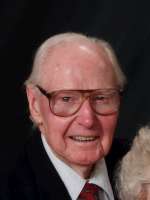 age 93, died in his sleep on September 28, 2013.  He is survived by his wife of sixty-nine years, Juanita, a son, Lyndel, (Susan) and two daughters, Debra, (Loren) and Kelley; four grandchildren and six great-grandchildren.  Nicknamed “Bop” by his grandchildren, Herman was beloved by his family and will be fondly remembered by all who knew him as a kind, generous and loving father, friend and colleague.  He was predeceased by his beloved granddaughter, Tisha, who died last February. Born in Seminole County, Oklahoma on March 1, 1920 to John and Rebecca Brumley, Herman was the seventh of nine children and was the last surviving sibling of his family; his passing marks the end of the generation. A veteran of WWII and a retired Major in the U.S. Army Reserves, Herman Brumley was interred, with full military honors, on October 4, 2013 at the National Memorial Cemetery of Arizona  in Phoenix; his home for the past fifty-one years.

Offer Hugs From Home Condolence for the family of BRUMLEY, HERMAN D