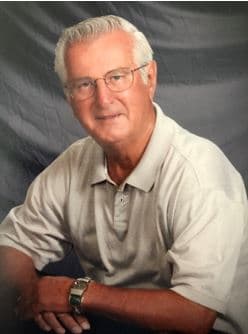 Beloved husband, father, grandpa, papa, great-grandpa, uncle and friend Dick Buelow, age 86, passed away on July 4, 2022 in Phoenix, Arizona. Dick was born in Fond du Lac, Wisconsin on March 23, 1936, son of Beulah (Rosenow) and Karl Buelow. About two years after his birth, Dick, his brother LeRoy and their parents moved to Kaukauna, Wisconsin where his father worked in a foundry. Dick’s father passed away when Dick was a junior in high school. In 1959, Beulah married Harvey Coenen, the best step-father Dick and LeRoy could have imagined, as Harvey was an excellent companion and caregiver to Beulah.

After graduation from Kaukauna High School, Dick joined the Air Force which brought him to Arizona. He was hired at Air Research the same day as his military discharge and remained employed there for a few years. He then began his career at Southern Pacific Pipe Line where he worked for 35 years, as a Plant Operations Manager for his final 10+ years of employment.

Soon after his arrival in Arizona, Dick met the love of his life, Evelyn “Chickie” Green and they married in 1958. Their children are Donna, Milt and Rick. Dick was active in school, sports and other Ss. Simon and Jude Parish activities. In 1991 Dick and Chickie moved to the north part of Phoenix and became involved in the Our Lady of Joy Parish. Dick enjoyed playing golf, walks through the desert, summers at their Forest Lakes cabin and competing in numerous classic car shows in Phoenix and northern Arizona.

Visitation will be held on Tuesday, July 12, 2022 from 5:00-7:00pm with a Rosary to begin at 6:00pm at Whitney & Murphy Funeral Home, 4800 E. Indian School Road, Phoenix. Funeral Mass will be celebrated on Wednesday, July 13, 2022 at 10:00am at Our Lady of Joy Catholic Church, 36811 N. Pima Road in Carefree. Interment to follow at 12:30pm at the VA National Memorial Cemetery of Arizona, 23029 N. Cave Creek Road, Phoenix. Reception to be held after the services.
In lieu of flowers the family gratefully suggests donations to Southwest Autism and Research Center (autismcenter.org) or Foothills Food Bank (foothillsfoodbank.com).

Offer Hugs From Home Condolence for the family of BUELOW, RICHARD OTTO