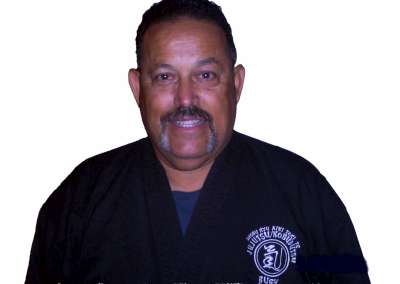 Robert Ross Bugh Sr., 71, of Phoenix, Arizona passed peacefully from this Earth into the hands of God Tuesday, March 18th at Scottsdale Healthcare-Osborn.  He was surrounded by his wife, Margie, family and friends. Bobby is survived by his wife of 50 years, Margie; children Cathline Bugh Barreras, Michelle Bugh Doherty (John), Robert Ross Bugh Jr. (Staci); grandchildren Sabrina Williams (Jake), Tony Jr. and Siara Barreras, Kelly and Kayla Doherty, Aaron Bugh; great-grand child Rylee Williams; three brothers and two sisters. Bobby began working at age six shining shoes for a nickel to help support his family.   As an adult Bobby worked in the aerospace industry as a painter and general manager of the paint department.  He also enjoyed body and paint work on cars and operated a small shop in his backyard.  He loved the outdoors and was an avid hunter.  He was a well-respected martial artist.  He began studying Aikido in the 70’s, opened his own dojo in his back yard and taught jujutsu.  In 1995 Bob was recognized with his own style of martial arts.   His school was named Shobu-Ryu Aiki-Tori-Te Jujutsu/Kobujutsu, Bugh Ha.  In 2003 he was recognized as Soke (grand master) after 30 years of service to the arts.  In 2006 he was granted the rank of 10th dan.   Since then he has been recognized internationally and inducted into the United Nations Martial Arts Black Belt Hall of Fame in 2007 and the Action Martial Arts ‘Hall of Honors’ in 2011.  Bobby also volunteered with the Phoenix Fire Department at Station One for 10 years; and at Encanto Elementary School for 10 years where he often translated at conferences, supported school events, and every December Santa Claus mysteriously appeared for the children. Services will be Saturday, March 29, 2014 at Saint Mary’s Basilica, 231 N. 3rd Street, Phoenix, AZ.  Viewing at 8:45 a.m. and Funeral Mass to follow at 9:45 a.m.

Offer Hugs From Home Condolence for the family of BUGH, ROBERT ROSS, SR.