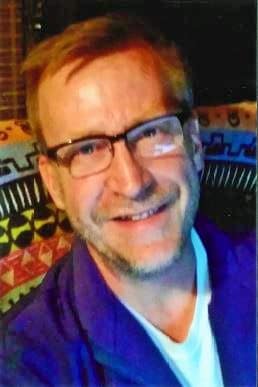 Gregory Mitchell Buls passed away at the age of 53 in Gilbert, Arizona on June 21, 2020 after succumbing to cancer.

Gregory was born in Spokane, Washington and later moved to Missoula, Montana with his family where he met what would be some of his lifelong friends.

During high school, he participated in Speech and Debate, winning the title of Policy Debate State Champion two years in a row. He was a National Merit Finalist as well as senior class president and graduated from Sentinel High School in 1985.

He went on to graduate from Trinity University of San Antonio in 1989. Fresh out of college, he moved to Arizona and started Kingpin Comics, which soon became an incredibly successful international comic book distributor. He discovered the Orthodox Christian faith and met one of his best friends, Father James Thorton, through the religion.

Father James introduced Gregory to Tatiana Mileant. They fell in love and married in October of 1998. They had two daughters, Sophia in 2004 and Vivian in 2006, both born in Prescott, Arizona.

The family moved multiple times before finally choosing to reside in Oklahoma, where he started his most recent and most successful business. After his loving wife passed of cancer, Greg moved his business and children to Arizona in 2015. During the next five years, he watched his two joys grow into intelligent, beautiful young women.
He is survived by his Mother, Donna Buls, 82, his sister, Stephanie Buls, 55, and his daughters, Sophia Buls, 16, and Vivian Buls, 14, as well as his beloved dog, Midnight.

Services will be held at 10:00 AM on Saturday, June 27, 2020 at St. Ignatius Orthodox Church, 2402 North Usery Pass Road, Mesa with Father James Coles officiating. Burial will immediately follow the ceremony via funeral procession to the Queen of Heaven Cemetery, 1562 East Baseline Road, Mesa. Following both official ceremonies, all family and friends are invited to a Celebration of Life beginning at 2:00 PM at the family’s home.

Offer Hugs From Home Condolence for the family of BULS, GREGORY MITCHELL