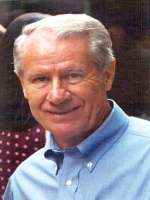 Passed away peacefully on June 30, 2013.  Born in Hartington, Cedar County, Nebraska, on September 7, 1934.  He was the son of Art and Gertrude Burbach and one of ten children.  He is survived by his wife of 39 years, Marilyn, two sons, Matthew (Karin) and Christopher (Stacey), and six grandchildren, Ella, Ryan, Bryn, Oliver, Graham and Vivienne.  He is also survived by siblings, Gene, Romaine, Claudia, Chuck, and Richard, and was preceded in death by his parents and siblings, Don, Della Bruns, Art, and Karen Chapman.  Jerry attended Conception, Mount Calvary, and Saint Paul seminaries, and graduated from the University of Nebraska.  He served the Archdiocese of Omaha as a priest for 14 years, was the author of the Omaha Archdiocesan Study and the Director of Pastoral Planning.  He valued lifelong education earning four Masters Degrees:  Philosophy, History, Sociology, and Business Administration.  Passionately believing in social justice, civil rights and equality, he participated in the Freedom March in 1965 in Selma, Alabama, alongside Martin Luther King, Jr.  A man dedicated to service and helping those in need, Jerry served the poor through the St. Vincent de Paul Society and was a sponsor at Ozanam Manor Shelter for the Disabled Homeless.  He was an active member of Alcoholics Anonymous and a sponsor for many.  He served on the Board of the Franciscan Renewal Center, and was owner and developer of Villa Montessori School, along with his wife, Marilyn.  As part of his many dedications and passions throughout his life, Jerry was the Director of Social Services for Western Nebraska; Assistant Director of the Maricopa County Medical Society, Founder of Medical Practice Management; National President of the American Society of Ophthalmic Administrators; Board member of the Arizona Interfaith Movement; and an active member of the Franciscan Renewal Center in Scottsdale.  Mass of the Resurrection will be celebrated Saturday, July 6th at 11:00 am at the Franciscan Renewal Center, 5802 East Lincoln Drive, Scottsdale, followed by a luncheon and private interment at Saint Francis Cemetery.  The family will greet guests from 10:00 am to 11:00 am, prior to the Mass.  In lieu of flowers, the family requests donations be made in Jerry’s name to the Saint Vincent de Paul Society, P.O. Box 13600, Phoenix, AZ 85002-3600 or the Franciscan Renewal Center.

Offer Hugs From Home Condolence for the family of BURBACH, GERALD “JERRY”