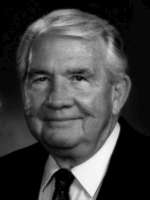 Bud Burke, 85, native Phoenician, owner of Phoenix pharmacies and later an investment broker, died on May 25 in Phoenix. As a U.S. Army soldier in the Pacific during World War II, he earned three ribbons and five medals, including three bronze stars. His heroism included a lifelong humanitarian instinct; for example, he shot an enemy sniper from a tree but then rushed him to a field hospital and demanded treatment for the man, who survived. He was a member of Rotary 100, Boy Scouts, the Phoenix Country Club, and the Valley Field Riding and Polo Club. He was a founding member of the Phoenix Art Museum Men’s Council. His late wife, Elinore “Ellie” Geare Burke’s family operated the Central Avenue Dairy. His grandfather, Dennis A. Burke, mayor of Prescott, built and owned Prescott’s Hotel St. Michael, originally The Burke Hotel. On his mother’s side, Bud was the descendent of a family that had come to the Southwest with Father Serra and the Spanish colonists in 1769. He is survived by his daughter, Kathleen Butler (the late Stephen “Skip” Butler) and by his son, Dennis Michael Burke (Maureen West), both of Phoenix. He is also survived by grandchildren Beverly Damore (David), Stephen Butler (Dana), Austin Burke (Elanna Cahn), Lauren Burke (Jay Driskell), and by great grandchildren, Cody and Ella Butler. He is also survived by his sister, Carolyn Lane (Ray) and many nieces and nephews. A Memorial Service will be held at 1 p.m. Sunday, June 6, at the Whitney & Murphy Funeral Home, 4800 E. Indian School Road in Phoenix. In lieu of flowers, the family has suggested memorial contributions to the St. Mary’s Food Bank Alliance, 2831 N. 31st Ave., Phoenix, AZ 85009.

Offer Hugs From Home Condolence for the family of BURKE, B.F. “Bud”