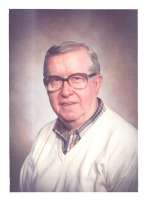 His Irish eyes were smiling as he lost his battle with cancer; Tom found peace on October 15, 2012 at the age of 88 surrounded by his loving wife of 65 years, Mary Scannell Burns, and several family members. He was born April 23, 1924 in Chicago and moved to Arizona in 2008. An avid White Sox fan, Tom loved attending spring training games. The Arizona Cardinals (formerly the Chicago Cardinals) was his favorite football team. Tom served bravely & proudly in what was then the Army Air Corps during WWII. He was a Fourth Degree member of the Dr. Tom Dooley assembly of the Knights of Columbus for 60 years. He was a devoted husband and father of seven children; Kathy (Rich) Lee, Tom, Jr. (Mary Ellen), Bob, Larry (Janet), Chuck (Sandi), John (Laurie) and Jim (Lisa). He will be greatly missed by his 15 Grandchildren, and 14 Great-Grandchildren. He was preceded in death by his infant granddaughter Kelly Ann Burns, and his sister and dearest friend, Marie Burns Dunne. Tom was extremely fond of and close to his niece and nephews; Jack Dunne (Joan), Tom (Jeanne), Jim (Mary Jo), Patricia (John) Moran, and special friend Claudia. Visitation will be held at Brophy College Preparatory Chapel, 4701 N. Central Avenue, Phoenix at 11:30am on Saturday, October 20, 2012 with a Funeral Mass to follow at 12:30pm. Inurnment will take place on Wednesday, October 24, at 2:30pm at the National Memorial Cemetery of Arizona, 23029 N. Cave Creek Road, Phoenix. Tom’s transition was greatly eased by the dedicated and caring staff from Hospice of the Valley. In lieu of flowers, memorials may be made in his name to Hospice of the Valley, 1510 E. Flower Street, Phoenix, AZ 85014. Arrangements entrusted to Whitney & Murphy Funeral Home. You are invited to sign the guestbook at www.whitneymurphyfuneralhome.com.

Offer Hugs From Home Condolence for the family of BURNS, THOMAS P.