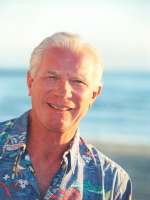 Benjamin A. “Ben” Butler, 78, a native Phoenician passed away on Tuesday February 8, 2011 surrounded by his loving family. He was the son of Bertha and
R.G. “Ted” Butler. Ben attended St. Mary’s High School and ASU and was in Delta Sigma Phi Fraternity majoring in business.
He was the owner of Butler Brothers and Associates for years prior to merging with Farmer Butler Leavitt Insurance Company.
Ben’s involvement in our community included serving on the Council for SRP, Phoenix Thunderbirds, 100 Club of Arizona, St. Mary’s High School Posse Program and memberships in the Italian American Club and the Valley Field Riding and Polo Club.
He was a sports man who enjoyed body surfing, softball, racquet and hand ball, and he was an avid Sun Devil fan.
Ben and his son, Ted, shared a love of hunting and deep sea fishing in the Sea of Cortez on the Como No II.

Predeceased by his parents and sister Carol, he is survived by his wife of 53 years, Earlene, 5 children, Lynn Butler, Ted Butler, Amy and Dave Prechel, Lisa Butler, Molly and Kevin Lewis, and his adored grandchildren Jonathan and Kristine Hodge, Kayley, Lauren and Carter Prechel, Ashley Morrison, Parker and Phoebe Lewis, sister, Sharon and Robert O’Malley and brother, Brien H. Butler and his nieces/nephews.

Offer Hugs From Home Condolence for the family of BUTLER, BENJAMIN