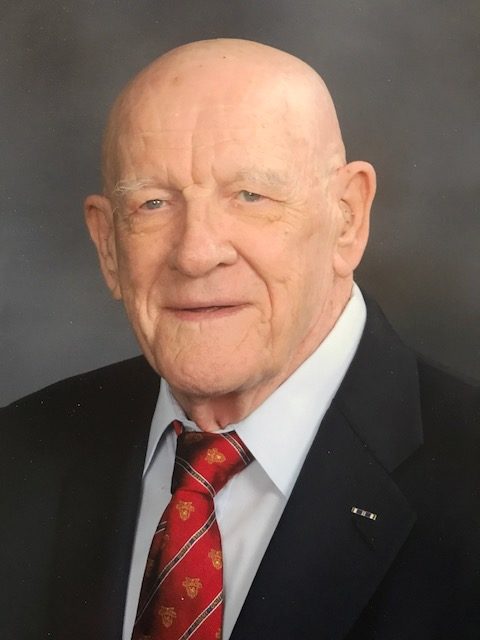 Jerome (“Jerry”) Frederick Butler passed away on Thursday, August 24, 2017 at Highgate Senior Living Community, Prescott, AZ at the age of 93. He was preceded in death by his beloved wife of 55 years, Julia Helene (Larmoyeux) Butler, in 2003. Mr. Butler is survived by his two children, Barbara (Harry) Gooding of Prescott, AZ and Jerome (“Jay”) K. (Julia) Butler of Front Royal, VA. He also leaves behind his seven grandchildren, Elisabeth (Rory) Crooks, Steven (Lauren) Gooding, Kristen (Eric) Tinson, Emma Butler, Katherine Butler, Julianna Butler, and Jerome K. Butler, Jr.; and six great-grandchildren, Ryan Crooks, Daniel Crooks, Clara Tinson, Charles Tinson, Emily Gooding and Claire Gooding. Mr. Butler is also survived by many nieces, nephews and cousins. Mr. Butler was born on December 24, 1923 in Knoxville, TN. He was the only child of the late Frederick W. Butler and Barbara (McManus) Butler. He grew up in the coal mining community of Valley Creek, TN and attended military schools in Kentucky, Illinois, and Florida during his high school years. Mr. Butler was initially commissioned as a Second Lieutenant of Infantry from the U.S. Army Officer Candidate School at Ft. Benning, GA in 1943. He later resigned his commission upon receiving an appointment to the United States Military Academy at West Point, NY from which he graduated in 1946. He was commissioned as a Second Lieutenant in the U.S. Army Air Forces, which became the U.S. Air Force the following year. Mr. Butler was a highly decorated veteran of the Korean War, having been awarded the Distinguished Flying Cross for his heroism as a combat pilot of a T-6 “Mosquito,” providing air support to the U.S. Army 2nd Infantry Division, which was surrounded by the Chinese at Ku-Nu-Ri, Korea on November 27, 1950. In 1961 Mr. Butler left the Air Force at the rank of Captain and transitioned into the Civil Service in the FAA as a test flight engineer. He and his family moved to Oklahoma City, OK, where they remained for 14 years. In 1975, Mr. Butler and his wife moved to Elk Grove Village, IL with FAA. In 1980 he retired from FAA and moved to Chandler, AZ, where he worked at McDonnell Douglas until his full retirement in the mid ‘90s. Mr. Butler was a devout Catholic who loved the Lord, his family and his country. The discipline and patriotism that were instilled in him as a cadet at West Point remained a hallmark of his life. He enjoyed reading, studying economics and the stock market, dancing, traveling and flying his private airplane, particularly in his younger adult years. Mr. Butler was known among his family, friends and colleagues for his strong work ethic, honesty, candid demeanor, colorful sense of humor and indomitable spirit. He was a founding member of St. Andrew the Apostle Catholic Church in Chandler, AZ. After the death of his wife, he moved to Sun Lakes, AZ and was a member of St. Stevens. The last three and a half years, he made his residence in Prescott, AZ and belonged to Sacred Heart Catholic Church. He spent the last few months of his life under the care of Hospice Family Care at his residence at Highgate. His family is very grateful for the wonderful care and dedication of Hospice Family Care and the Highgate staff. A visitation for Mr. Butler will be held on Friday, September 1, 2017 from 6 to 8 p.m. with the Rosary at 7 p.m. at Whitney & Murphy Funeral Home, 4800 E. Indian School Rd., Phoenix, AZ. A Funeral Mass will be held on Saturday, September 2, 2017 at 10:00 a.m. at St. Francis Xavier Catholic Parish, 4715 N. Central Ave., Phoenix, AZ. A burial service with full military honors is planned for a future date at the West Point Cemetery, West Point, NY. In lieu of flowers, donations in Mr. Butler’s memory can be made to Hospice Family Care, 3195 Stillwater Ave., Suite A, Prescott, AZ 86305.

Offer Hugs From Home Condolence for the family of BUTLER, JEROME FREDERICK