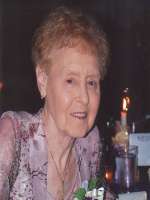 Died December 28, 2010 at home surrounded by her 9 children and 23 grandchildren. She was born July 2, 1930 to Leo P. Beck and Edith Winzenreid in Martins Ferry, OH. The family moved to Phoenix in 1937. She married Robert F. Butts, April 24, 1952 at St. Francis Xavier Catholic Church in Phoenix. Robert died May 9, 1983. Joyce graduated from St. Francis Grade School and was in the second graduating class of Xavier College Prep. She went on to the St. Joseph’s School of Nursing and under the tutelage of the Sisters of Mercy receiving her RN Degree and worked in the Emergency Room until the birth of her fifth child. She and Bob then went on to have four more children and all her energies, triumphs and life lessons went into raising her children, all of whom attended St. Theresa Catholic School and then graduating from Gerard Catholic High School. Joyce spent countless hours at both schools, driving children and friends to all of the baseball, softball, football and basketball games that were continually played around the state. She was her children’s biggest cheering section at those games and she also enjoyed the role of Campfire Leader for several of her daughters and Boy Scout Leader for two of her sons. Joyce and Bob and all of their children enjoyed raising Quarter Midgets at South Mountain Quarter Midget Assoc. and traveled mainly to CA, CO, NV, OR and WA to race with other families and friends. Family vacations were all about camping with the much loved travel trailer and fishing all of the lakes and seeing the sites of Arizona and California. At St. Theresa, Joyce worked tirelessly for the St. Vincent de Paul Society, was an Extraordinary Eucharistic Minister for the homebound and sick, a church lector, and always had time for a game of Bridge. She enjoyed bowling weekly and was a member of the Church Sodality. Bob and Joyce, together with Bob’s brother owned and operated City Delivery, Inc. When Bob died, Joyce and two of her sons began Sun Valley Express, where Joyce worked part-time until retiring in 1990 at which time her sons took over the daily operations. Joyce was an optimist and always encouraged her children to look for the positive in all of life’s lessons. Her faith made her the wonderful wife and mother that we entrust to God. She is preceded in death by her husband Bob, parents, Leo and Edith and her brother Jerry. She is survived by her brother Bill Beck, sister Nancy Poppe, and nine children, Patti Cookman (Phillip); Barbara Cornish; David (Melinda); Robert Jr. (Jeri); Cathy Markusic (Steve); Terri Duffy; Ann Garey (Frank); Sandy Greer (Jeff) and John (Cynthia). She also leaves behind 18 grandchildren and 5 great-grandchildren. Faith and family were everything to Joyce and we will celebrate her life with a Visitation and viewing on Sunday, January 2, 2011 from 6:00 to 9:00 p.m., with a Rosary at 7:00 P.M., at Whitney & Murphy Funeral Home, 4800 E. Indian School Rd., Phoenix, AZ Funeral Mass will be on Monday, January 3, 2011 at 10:00 A.M., at St. Theresa Catholic Church, 5001 E. Thomas Rd., Phoenix, AZ.
Her final resting place will be St. Francis Cemetery, next to her beloved husband, Bob. Donations may be made to Hospice of The Valley, 1510 E. Flower Rd., Phoenix, AZ 85014

Offer Hugs From Home Condolence for the family of BUTTS, JOYCE CAROLYN (Beck)