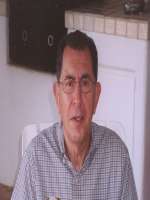 76 passed away on Tuesday, July 20, 2010 in Scottsdale, Arizona. He was born and raised in Chicago, IL and served in the U.S. Army during the Korean War. He was a long time resident of Des Plaines, IL where he was a lithographer with Local Union 458M, until he retired in 1994 and moved to Arizona in 2001. He was an avid reader, Chicago sports fan, historian, and loved to paint in water colors. He served as elder and trustee for many years at Good Shepherd Lutheran Church in Des Plaines, IL. He is survived by his wife Marilyn of 51 years, children; Judy (Jim) Farmer, Michelle (Joe) Battaglino, John (Andrea) Caldarella, Melaine Caldarella, grandchildren; Kristin, Karl, Christine, Christian, Toni, sister Madeleine Fonseca and many nieces and nephews. A Memorial Service will be held at 10:30 AM on Saturday, July 24, 2010 at Christ Church Lutheran, 3901 E. Indian School Rd, Phoenix, Arizona. Memorial donations can be made in Johns name to Christ Church Lutheran or Christ Lutheran School.

Offer Hugs From Home Condolence for the family of CALDARELLA, JOHN L