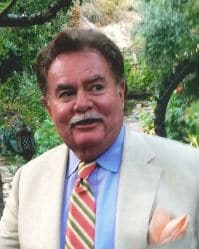 Phil, affectionately known as Chubb by family and friends, passed away peacefully on June 16, 2022 after a lengthy illness.

A native Phoenician, Phil was born December 28, 1944 to Philip and Evelyn Calihan. He attended St. Francis Xavier Elementary School, Brophy College Preparatory and the University of Arizona where he was a proud Wildcat! Phil was a member of Delta Chi Fraternity and served as their President. Along the way at Brophy and UofA he made many friendships which he treasured throughout his lifetime.

Upon graduation Phil joined Hughes-Calihan, a family-owned business, started by his dad and Harold Hughes. Working with his brothers Peter and Patrick and teaming up with Jim Hughes they grew the business into a highly respected corporation.

Chubb and Anita partnered with the Guelker’s to open Chubb’s, famous for their prime rib. It was a fun popular spot for many years.

Phil and Anita enjoyed summers at Lake Tahoe. It was Phil’s favorite place to be. Captain Chubb loved Chubbin around the lake with family and friends. His fondest Tahoe memories were summers spent with son Phil and his buddies cruising the lake and stopping at Chambers Landing.

Chubb will be remembered as a kind, fun loving, wonderful man. He loved his friends, country music, and a cold Miller Lite.

A special thanks to Jamie and the staff at Constant Care who took such wonderful care of Phil the last five years. He was loved by them every day. We would also like to thank Dr. Williams, Amy, and the staff at Hospice of the Valley for their excellent care and support throughout his journey.

Predeceased by his parents and brother Patrick, he is survived by his devoted wife of 54 years Anita, their son Phil III and his wife Robyn and their children Claire and PJ, who Grandpa Chubb loved with all his heart. sister: Mary Kathleen Burkhalter, brother: Peter and his wife Mary, sister-in-law: Becky and a clan of nieces and nephews who will miss Uncle Chubb.

A family Funeral Mass has been held at Brophy Chapel and he has been laid to rest at St. Francis Cemetery, Phoenix, AZ. A celebration of life will be held in the fall.

Contributions in his memory may be directed to The Brophy College Preparatory Generations Endowment Fund at https://www.brophyprep.org/giving/support-brophy or Hospice of the Valley 1510 E. Flower Street Phoenix, AZ. 85014. Condolences may be expressed at www.whitneymurphyfuneralhome.com

Offer Hugs From Home Condolence for the family of CALIHAN JR., PHILIP JOHN