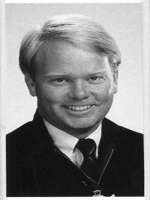 Patrick D. Calihan passed away peacefully Thursday, September 12, 2013 in Central Phoenix. A native Phoenician, Pat was born on September 8, 1950, the youngest of four to Philip and Evelyn Calihan. Pat followed his sister Kathleen and brothers Phil and Peter in attending Saint Francis Xavier for elementary school.  Pat followed his brothers to Brophy College Preparatory where he excelled in athletics and forged lifelong friendships. In the fall of 1969, Pat attended The University of Arizona where he proudly presided over the Sigma Alpha Epsilon Fraternity, again forging lifelong friendships, and given the endearing nickname “Whetto” which stays with him to this day.

Upon graduation, Pat joined his brothers at Hughes-Calihan, the family business started decades earlier by his father Philip Calihan and Harold Hughes. Pat’s tenacious work ethic, steadfast integrity, and most importantly his seemingly effortless ability to connect with clients and employees, were key in the company’s success for decades. Aside from business, Pat was truly a Man for Others, giving back to the community through The Optimist Club, Saint Francis Little League, the Brophy/Xavier community, and The Thunderbirds.

An avid family man, friend, golfer, storyteller and confidant, Pat was loved by all who knew him. Thanks to a smile that immediately warmed your heart and an unmatched love for life, Pat will always be remembered by the countless stories told by those who loved him most. Thanks to daily reminders of his kindness and fondness for others, his children and grandchildren will forever follow in Pat’s footsteps.

Tragically, Pat was stricken with an ailment in the prime of his life that eventually took away his cognitive abilities but never his thirst for life. Never complaining and never compromising, Pat will be remembered and honored by all as a fighter till the very end.  Pat’s family and friends are forever grateful to the doctors and caretakers who not surprisingly took Pat into their hearts and time and time again went the extra mile to ensure Pat’s comfort and well-being. In lieu of flowers, the family has asked that contributions in Pat’s name be sent to Hospice of the Valley at 1510 East Flower, Phoenix, AZ 85014 to assist future families faced with similar circumstances.

He was predeceased by his parents Philip and Evelyn. Pat is survived by his devoted Wife: Becky, Daughter: Molly and her Husband Chance Kruljac and their adorable 8 month old Daughter Cailyn, Son: Pat and his wife Erin and Son: Sean. Sister: Kathleen and her Husband Fred Burkhalter Brother: Phil and his Wife Anita, Brother: Peter and his Wife Mary, and his clan of Nieces and Nephews that will forever miss their Uncle Pat.

Offer Hugs From Home Condolence for the family of CALIHAN, PATRICK D.