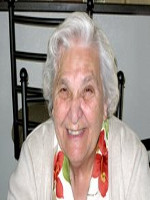 Dorothy Frances Campbell (Courtemanche) entered the arms of the Lord on September 30, 2009 surrounded by the love and music of family and friends. She was born in Brockton, Massachusetts on December 28, 1928 to Wilfred and Beatrice Courtemanche. In 1951 she joined the Navy where she was stationed in California. She met and married the love of her life, Arnold Baxter Campbell, from Moundville, Missouri in 1952. They lived in Maryland, Missouri and Massachusetts until finally settling in Arizona in 1969. They established Campbell’s Granite Surface Plate Service in 1975 and enjoyed traveling the country with the business for the next 34 years. She is survived by her husband Arnold, sister Marie Cook, brother Albert and four children Linda, Steve (Brenda), Mike (Kathy) and Rick (Nicole) and was blessed with twelve grandchildren and five great-grandchildren. She was preceded in death by brothers John and Robert, sisters Doris and Sylvia and grandson Scott. Visitation will be held on Monday, October 5, 2009 from 5pm – 8:00 pm with Rosary at 7:00 pm at Whitney & Murphy Funeral Home, 4800 E. Indian School Road, Phoenix. Funeral Service will be held at St. Theresa Catholic Church, 5045 E. Thomas Road, Phoenix, Tuesday, October 6, 2009 at 10:00 am. In lieu of flowers the family requests donations to St. Mary’s Food Bank, 2841 N. 31st Ave. Phx., AZ 85009 or Covenant House and Hospice Family Care, 950 N. Arizola Road, #2, Casa Grande, AZ.

Offer Hugs From Home Condolence for the family of Campbell, Dorothy Frances