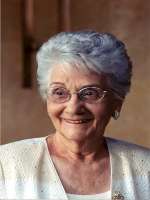 Angela Maria Campo, 102, passed away peacefully, of natural causes, on June 21, 2013 at her home in Phoenix, AZ.  She was born in Floridia, Sicily on February 22, 1911. When she was five years old, she moved to Hartford, Connecticut with her parents and 7 siblings.  While in nursing school there, she met the love of her life, John Campo, Jr., and they were married for 64 years before he passed away in 1998.  In 1953, they moved to Phoenix, AZ with their 4 children, John, Joan, Mary Louise and Robert.  Angela was a woman of faith and kindness, as well as a devoted wife, mother, grandmother and great grandmother who loved being surrounded by her family.  She had a passion for cooking and reading, and was a proud life member of the National Rifle Association.  Angela is preceded in death by her husband John, 2 brothers, 4 sisters and 2 grandsons, Robbie Campo and Jeffrey Kush.  She is survived by her children, John Campo, III (Mary Lou), Joan Colbert Galloway, Mary Louise Kush (Joe), Robert Campo (Jeanne), 11 grandchildren, 9 great grandchildren, her sister, Mary Frascarelli of Glastonbury, Connecticut, her sister-in-law Mary Eason of Indian Harbor Beach,  Florida, and several nieces and nephews.   Private services will be held for family only and Angela will be interred at St. Francis Cemetery next to her husband.  In lieu of flowers, the family would be honored by contributions in Angela’s memory to Hospice of the Valley, 1510 East Flower Street, Phoenix, AZ 85014.

Offer Hugs From Home Condolence for the family of CAMPO, ANGELA MARIA