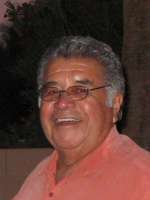 passed away on June 18, four days after his 79th birthday.  He leaves behind a loving family and many admiring friends and neighbors.  Ismael, known to many as Izzy, was born in Big Springs, Texas, on June 14, 1934, and before his 20th birthday he married the love of his life, Maria Elena Kuri.  The young couple began 59 years together by moving to Cozad, Nebraska, where they started a family.  Izzy is survived by Maria, six children, and two grandchildren.  The grown children are Izzy Caῆas, Jr., Anna Maria Caῆas (Reggie Lowe), Annabelia Boyles (Bob Boyles), Amelia Caῆas, all of Phoenix, Maggie Caῆas (Juan Rodriguez Moreno) of Nogales, Mexico, and Jose Luis Caῆas (Jaason Gregorovious) of Denver.  Grandsons who made him very proud, Mario Caῆas and Mozart Caῆas Rentana, both hail from Phoenix.  He also is survived by his brother David and sister Rebecca of Cozad.  He was preceded in death by a sister, Esther Caῆas Lopez, and a brother, Jose Lopez Caῆas, Jr.  Ismael spent many years at Allied Mills tending to Nebraska-grown alfalfa in the company’s grain elevators.  As her youngsters moved into teen years, Maria wished to find work, so Izzy “bought Maria a job.”  He purchased Cozad’s Dairy Sweet ice cream store in 1969 and operated it with the help of the family for the next eight years.  Soon, the Caῆas family migrated to Phoenix, where Izzy returned to grain elevators.  He worked for Bay State Mills, the towers now a landmark in downtown Tempe, and later in Tolleson, Arizona.  All who knew this kind, out-going, mellow man would agree with his fellow Bay State workers, who took joy in changing his nickname from “Izzy” to “Easy.”  Visitation will be held from 4-6pm with a Scripture Service at 5pm, Sunday, June 23, 2013 at Whitney & Murphy Funeral Home, 4800 E. Indian School Road, Phoenix.  Funeral Mass will be celebrated at 10am, Monday, June 24 at St. Theresa Catholic Church, 5045 E. Thomas Road, Phoenix.  Interment will then take place at St. Francis Catholic Cemetery.  A reception will follow.

Offer Hugs From Home Condolence for the family of CANAS, ISMAEL LOPEZ