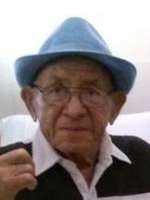 Juan J. Candelaria of Peoria entered eternal life on June 8, 2013.  He is preceded in death by his Father Reyes Candelaria, Mother Eufemia Candelaria, beloved wife of 48 years Ruby Candelaria, Sisters Rosie Atencio, Virginia Jaramillo, and Brother Benny Candelaria.  Juan who was born in Concho, Arizona was a lifelong resident of Springerville, Arizona and relocated to Peoria Arizona and lived with his niece and nephew Sal & Rosemary Martinez.  Juan was a World War II Army veteran and served with the 221st Field Artillery Battalion and fought battles in Northern Solomon, and Southern Philippines.  “Uncle Johnny” in survived by daughters Geraldine Nosie, Penny Schnepf, and granddaughter Brandy Schnepf and many nieces, nephews and special friends.Visitation will be held on Tuesday, June 11, 2013 from 5:30 pm to 7:00 pm followed by a Rosary at 7:00 at Whitney & Murphy Funeral Home, 4800 East Indian School Road. An Honor Guard Ceremony will be presented at 10:00am on Wednesday, June 12, 2013, followed by a Catholic Mass at 10:30am at St. Mark Catholic Church 400 North 30th Street.  A BIG Thanks to the many staff at Hospice of the Valley North Sun City PCU.

Offer Hugs From Home Condolence for the family of CANDELARIA, JUAN J.