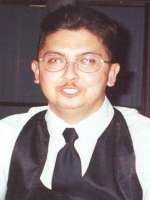 Art Canez Jr. “Doobie” passed away peacefully the morning of December 24, 2011 at the age of 36 in Phoenix, AZ. Art Jr. is survived by his father, Art Canez, Sr., his mother, Norma Bennett, his step-father, Frank Bennett, his sisters, Annette Canez and Courtney Canez and his brother Kevin Canez. If you had the honor of knowing Art Jr. you would agree that he was an incredible person. He touched so many lives with his intelligence, work ethic, one of a kind personality, wit and charm. He is best described as the strongest person you have ever met. Art Jr. always displayed himself as courageous and brave with a positive attitude no matter what kind of situation he was faced with. He was always cheerful, had the best sense of humor and loved to laugh and joke with everyone. Art Jr. always excelled in academics. He was co-valedictorian of his 8th grade class and at South Mountain High School he graduated with Honors in the top 2% of his class. He was part of the National Honor’s Society and he received several scholarships to attend Arizona State University. He went to ASU where he majored in Engineering. He completed 2 years of college before his illness prevented him from continuing. Art Jr. then followed in his father’s footsteps and in “The Canez Tradition” by entering the Masonry business. He had over 16 years combined experience of being a Senior Masonry Estimator, Masonry Project Manager and previous Co-Owner and Manager of Generation Masonry and Generation Group. His hobbies included Star Wars memorabilia, collecting baseball and basketball cards, learning computers, watching comedy and action movies and listening to Tejano and country music. He was truly an inspiration to us all and will be missed dearly. We hope that you will hold on to all of the special memories that you have of Art Jr. as we know he was truly loved by all of his family, friends and colleagues. Visitation will be held from 6-8pm with a Rosary at 7pm, Friday, December 30 at St. Agnes Catholic Church, 1954 N. 24th Street, Phoenix. Funeral Mass will be at 10:30am, Saturday, December 31. Interment to follow at St. Francis Catholic Cemetery.

Offer Hugs From Home Condolence for the family of CANEZ, ARTHUR, JR. “Doobie”