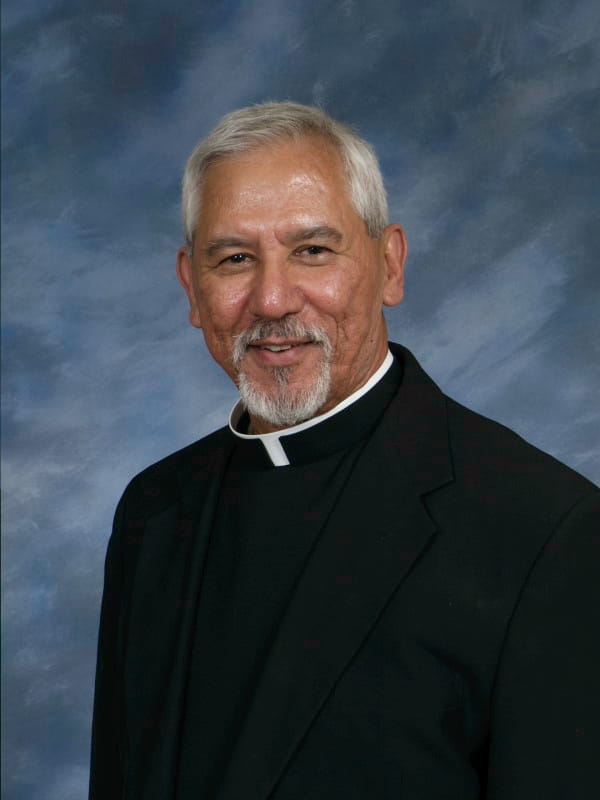 Rev. Jorge Ayala Cañez, 75, of Phoenix, AZ, passed away on August 4, 2022, after a long battle with Parkinson’s disease.
Jorge was born on June 4, 1947 to Luis and Emilia Cañez in Phoenix. He graduated from Carl Hayden High School in 1966. He enlisted in the United States Air Force in 1967 and served his country as an Airman for over 5 years. He went on to study and graduated from St. Meinrad Seminary and School of Theology, in Indiana in 1979. He was ordained as a Priest on May 19, 1979 in the Roman Catholic Diocese of Phoenix. Jorge enlisted in the Air National Guard in 1982 and spent over 16 years as a Chaplain and retired as a Lieutenant Colonel in 1998. Since his priestly ordination in 1979, he served at Queen of Peace Parish, St. Margaret Parish, Holy Family Parish, St. Edward Parish and lastly, at St. Thomas Aquinas Parish, where he retired in June of 2012. He was a former Third Degree Chaplain of the Holy Family Council #11675, and a Fourth Degree Sir Knight with the Fr. Joseph T. O’Callahan assembly #2609 with the Knights of Columbus.

Jorge loved his family and was there for anyone at any time. He will be remembered for his annual Christmas ornament exchange party he hosted for his family and close friends for over 25 years. Jorge had the love and passion for music, and in his younger life was a founding member and musician in the band, “Music Formula”. He loved being a DJ and proudly called himself “Puro Padre”. He was loved by his parishioners current and past and will forever be remembered for playing his guitar and singing “Feliz Navidad” at all his Christmas Masses. Jorge was full of life and was always on the go. He was a “Techey” before his time and was the king of gadgets. He will be remembered by all for his wonderful sense of humor and for having the kindest heart up to the end. He was the best Brother, Uncle, Nino and friend anyone could ask for. He will be missed immensely.

Offer Hugs From Home Condolence for the family of CAÑEZ, REVEREND JORGE AYALA