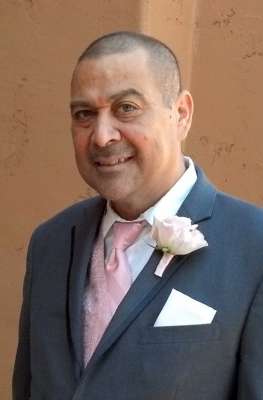 Jesus Cano was greeted at Heaven’s gates on April 2, 2015 and was reunited with his sister Estela Navarro (Fred). Jesus was born in Deming, New Mexico on August 13, 1965. He is survived by his parents Jesus and Elena Cano, his wife of 25 years Caroline, his children Jesus (Chachi) Cano III, and Mia Dee Trevino (Vince). Jesus also leaves behind two sisters Alicia Brambila (Jonathan) and Sandra Fritz (Larry). Along with the numerous nieces, nephews, extended family and friends that will miss him dearly.   Jesus graduated from Carl Hayden high school in 1984 and was a proud falcon. He would often be found reminiscing his days on the football field and the wrestling mat to anyone who would listen. Jesus worked 23 years in the grocery industry for Smitty’s and Fry’s.   His greatest joys were his children. He loved watching their growth and accomplishments throughout his life. Whether it be attending wrestling matches or dance and cheer performances, Jesus was their biggest fan.   Jesus’ second love in life was his Arizona Cardinals. He was a lifelong season ticket holder, cheering on his Cardinals from the early heat stricken days at ASU, to the inaugural game at the new University of Phoenix stadium.   Having a personality that was truly unique, his family would often refer to him as “The Politician”. He was recognized by friends where ever he went and would shake hands and greet others with a smile. Jesus had a truly magnetic and friendly nature. Once somebody would meet him it was certain that they would not forget him.   His smile, laughter and notorious big green eyes would light up a room and at times would even get him into a little trouble. Jesus taught us to love life and love each other. He will forever be in our hearts and our memories. We love you so, until we see you again! With love, The Cano and Hernandez Family   Visitation will be held from 9:00-10:30am, Rosary at 9:30am and Funeral Mass at 10:30am, Wednesday, April 8, 2015 at St. Agnes Catholic Church, 1954 N. 24th Street. Interment will follow at Holy Cross Cemetery, Avondale.

Offer Hugs From Home Condolence for the family of CANO, JESUS J.