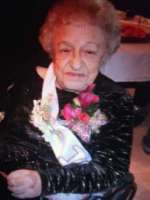 Rose Caparella passed peacefully on September 19, at Hospice of the Valley in Surprise. Rose was born February 2nd, 1911 in Buffalo, NY, one of ten children. She married Anthony Caparella in 1935. Anthony worked for the Ford Motor Co. for 25 years while Rose worked as a beautician in the beauty shop Anthony built for her. In 1955 they moved to Phoenix. Anthony worked in construction and Rose continued as a beautician at the Highway House. Following Anthony’s death in 1972, Rose moved to Sun City. Rose enjoyed her three wheel bicycle, ceramics, needlework and making beaded crystal Christmas ornaments for everyone in the family. Many fortunate family members received her widely coveted multiple colored pasta bowl. Rose’s passion was cooking and baking. In 2010 at the age of 99 she won first place in the Maricopa Co Fair for her bread. Nothing gave her more pleasure than cooking for her family and friends. Rose was a devout Catholic and active in many church and social organizations. In February over 100 family members attended her 100th Birthday Celebration. Rose is survived by her daughters, Lavina Dawson of Sun City and her son Joseph and daughter-in-law Muriel of La Conner, WA, grandsons Stephen and Joseph Caparella of Phoenix, Lt. Col. Anthony Caparella of Shiloh, IL and Michael and Christopher Dawson of Santa Monica, CA, 12 great-grandchildren, 6 great, great-grandchildren. She is also survived by sisters Helen Failla, Marie Barnes and Gloria and husband Stephen Maggio and brother Michael Manguso all of Phoenix. Visitation will be from 5-8pm, with a Rosary at 7pm, Thursday, September 22 at Whitney & Murphy Funeral Home, 4800 E. Indian School Road. Funeral Mass will be at 10am, Friday, September 23 at St. Theresa Catholic Church, 5045 E. Thomas Road, Phoenix. Interment will follow at St. Francis Catholic Cemetery.

Offer Hugs From Home Condolence for the family of CAPARELLA, ROSE MARIE