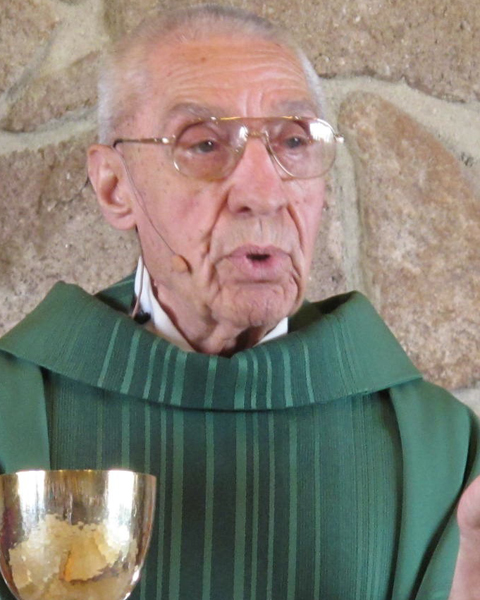 (February 2, 2018; Darien, IL) The Province of the Most Pure Heart of Mary, Order of Carmelites, mourns the death of the Reverend Valentine Boyle, O. Carm., who died at the age of 97 on Thursday, February 1, 2018, at Scottsdale Square Health Center in Phoenix, Arizona.
Visitation for Father Valentine will be from 5PM to 7PM at St. Agnes Church, 1954 North 24th Street, Phoenix, Arizona, with Funeral Mass to follow at 7PM, on Monday, February 5, 2018.
There will be a second visitation on Thursday, February 8, at Our Lady of the Angels, 225 37th Street, Pittsburgh, Pennsylvania, from 9AM to 11AM with Mass of Christian Burial to follow at 11AM. Immediately after Mass, interment will take place at Mount Carmel Cemetery, 7601 Mount Carmel Road, Verona, Pennsylvania.
Father Valentine was born to (the late) John Joseph Boyle and (the late) Frances Barbara (Boehm) Boyle on June 29, 1920, in Pittsburgh, Pennsylvania. His name at baptism was Leonard Raymond Boyle. He is survived by his nieces and nephews and his Carmelite brothers.
Leonard attended Saint Catherine Parish School in Pittsburgh, Pennsylvania, before attending Mount Carmel Junior Seminary and Mount Carmel College in Niagara Falls, Ontario. He received the Carmelite habit on August 14, 1939, and professed simple vows to the Carmelites in the Province of the Most Pure Heart of Mary on August 15, 1940, taking the religious name of Valentine. On August 15, 1943, Valentine made his solemn profession with the Carmelites. He then attended Whitefriars Hall and the Catholic University of America in Washington, DC. He was ordained a deacon on October 8, 1945, and was ordained a priest on June 11, 1946, at the National Shrine of the Immaculate Conception in Washington, DC.
Father Valentine began his ministry in 1947 as a teacher at Mount Carmel High School in Chicago, Illinois. During that same time he served as Associate Pastor at Saint Clara Parish in Chicago, Illinois, a position he held until 1952. He went on to serve as Assistant Pastor at Saint Mary Carmelite Parish as well as Administrator of Our Lady of Mount Carmel Mission, both in Joliet, Illinois. In 1960, he became Assistant Pastor at Saint Joseph Parish in Leavenworth, Kansas and was appointed Pastor there in 1966.
After nine years as pastor of Saint Joseph’s, Father Valentine moved to Phoenix, Arizona, where he served as Associate Pastor at Saint Agnes Parish and was appointed to the Marriage Tribunal of the Diocese of Phoenix. In 1985, continuing his work with the Marriage Tribunal, he was appointed Administrator of Good Shepherd Mission in New River, Arizona. During this time he always assisted the Catholic Missions on the Gila River Pima Reservation.
In 2003, Father Valentine retired to the Carmelite Community at Saint Thérèse Priory in Phoenix, Arizona, where he remained until his death.
May he rest in peace.
For further information on the Reverend Valentine Boyle, O. Carm., or the Order of Carmelites, contact Carmelite Media at (630) 971-0724 or visit the Carmelite website at www.carmelnet.org.