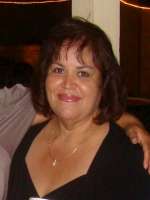 She began her journey on April 29, 1961 and went to be with the angels on September 2, 2011.
She was gifted with and shared her generous heart with all that knew our Mom. Her smile was contagious, always trying to see and live life like one of her favorite sayings “It’s a beautiful day, the sun is shining”. She could energize any area she occupied with her charm and antics. Her generosity was felt by many because of her willingness to forsake her own wants and needs so that she could make someone’s life easier. Her greatest enjoyment was time spent with family and friends. She was predeceased by her father Walter Ortega. She is survived by her husband Jorge, daughters Vanessa and Diana, son Jorge Jr., and her grand-daughter Lily. She also leaves behind her mother Lupe, brothers Walter Jr., David and Eddie; and her sister Monique.
The Visitation will be held Sunday, September 11, 6 -8 pm with a Rosary at 7 pm at Whitney & Murphy Funeral Home, located at 4800 E. Indian School Rd. Phoenix, AZ. Funeral Mass will be held the following morning at St. Catherine of Siena Catholic Church starting at 10:00am. The location is 6200 S. Central Ave, Phoenix, AZ.
Maria de los Angeles, may you dance with all of the angels in heaven!

Offer Hugs From Home Condolence for the family of CARRILLO, MARIA ORTEGA “Mary”