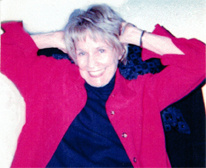 Beverly Ann Carver was born in Douglas Wyoming on September 17, 1934. Beloved daughter of J. Emmett Carver and Lillian Russell Carver, Bev was proud of her Wyoming heritage and her deep roots in the State. A natural and gifted educator, Bev’s legendary contribution to education began in high school, when she was called upon to substitute teach younger children and contribute to their musical programs at the holidays. Her delicate musical gift at the piano and her silvery singing voice inspired children even before her professional career in education began.
Bev is survived by her daughter, Natalie Jeffrey, son-in-law John Jeffrey, three grandsons, John (JT), Courtland, and Brinn Jeffrey, and Bev’s life partner, Sheila Murphy. She was preceded in death by her parents and by her sister, J.C. (Judy) Martin and her son, Jamie Pergeau.
Bev earned the bachelor’s degree from MacMurray College in Illinois, the master’s degree in Education from Harvard University, and the Ph.D.in Educational Administration from Arizona State University. A Charles Stewart Mott Fellow, Bev masterminded several vital community initiatives for Scottsdale School District, including a community census during a time of simultaneous growth and decline in enrollment during the 1970s, involving 5,000 volunteers visiting 66,000 homes in the school district. Her doctoral dissertation represented a distinctive design for establishing goals for the decade of the 1980s, involving extensive community involvement using a Nominal Group Technique Modified Delphi process engaging community, educational, and business leaders.
During her extensive educational career, Bev taught every grade from kindergarten through graduate school. She was an innovator, recognized while engaged in studies at Harvard, and was asked by a prestigious school, where many Harvard faculty children attended, to join the faculty full time while still earning her master’s degree. This was unheard of at the time, and Bev was gently guided by the Dean of Education to delay full-time employment until her degree was completed.
Following completion of that degree, Bev ventured to Alaska, where she sought the level of salary that would facilitate her paying off educational debt. She later taught in Minnesota at the elementary and university levels. She spent many years with Scottsdale School District prior to and following her earning of the Ph.D. Degree.
During the 1980s and 1990s, IBM contracted with Bev and other top educators to serve as consultants as the organization sought to integrate technology into classroom learning. Bev was a natural, working with teachers all over the world, including Guam, the Mariana Islands, and numerous states on the mainland. A favorite assignment in Arizona was with the Winkelman School District, where Bev spent a very happy two years collaborating with teachers and administrators on the full integration of technology into learning at all levels.
Among her Renaissance capabilities, Bev served her neighborhood community as a strategist, masterminding a successful project that protected local interests. She was a noted literary archivist, and a gifted editor of poetry. Bev co-curated the Scottsdale Center for the Arts Poetry Series for 12 years.
Bev and Sheila traveled extensively throughout the world for decades, frequently visiting Sheila’s brother Tom and his partner Dr. Timothy Keogh at their home in Australia. Recent years precluded Bev’s travel, and in approximately 2005, Bev made the decision to remain at home, rather than leaving the house, in an effort to mitigate the challenges with mobility that a neurological condition brought about.
As a completely can-do person, inventive and creative to the hilt, Bev loved hosting parties, designing the home in a creative way, and making sure her beloved grandchildren had fascinating places to play in the house.
Bev leaves a legacy of treasured friendships and love. She will always be remembered as generous, insightful, perceptive, and a guide to many, always rising to the occasion to bring love and light into the lives around her.
A memorial service will be held on Tuesday, September 20, 2022 at 10:00 am at Whitney & Murphy Funeral Home, 4800 E Indian School Road in Phoenix. For those unable to attend in person please join us online at https://www.facebook.com/WhitneyMurphyFH/live/. The family asks that, in lieu of flowers, donations be made in Bev’s memory to the Ann Bancroft Foundation: https://www.annbancroftfoundation.org/

Offer Hugs From Home Condolence for the family of CARVER, BEVERLY ANN