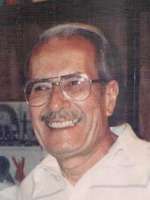 98, born August 13, 1915 in Youngstown, Ohio, died peacefully on September 11, 2013.  John was preceded in death by Mary (Carano), his wife of 69 years, parents Angelina and Vincent, brother George and sisters Elvira, Clotilda and Yolanda (Wilson) Earnheart.  Although John had a love of learning it was necessary for him to quit school at an early age and work to help support his family.  Though 4F for military service during WWII due to blindness in one eye, John nevertheless contributed to the war effort, working as a civilian aircraft mechanic at the Yuma Army Air Base.  John was an entrepreneur, owning and operating many businesses over the course of his life; an independent coal delivery service in the Midwest, dry-cleaning shop, neighborhood grocery and pizza parlors but many people will remember him best for the twenty years he spent working at Montgomery Ward.  Upon retiring from Ward’s, John again returned to his goal of operating a small business, this time pizza parlors in Phoenix and Tucson.  John is survived by his daughter Elaine (Ed) Ajamie, sons John and Bob, brother-in-law Al Nerone, six grandchildren, Tom Ajamie, Theresa (Bill) Labadie, Jean Ajamie, Jacqueline (Peter) Labadie, John Ajamie, Heather Casciato,  and seven great grandchildren, Malia and Kaili Ajamie, Mary Helen and Joseph Labadie, Tristan, Danny and Kayla Labadie and many nieces, nephews and cousins located around the world.  The family wishes to express their appreciation and gratitude to the extraordinary people at Hospice of the Valley who cared for our Dad and helped make his last days so comfortable.    Visitation will be held from 6-8pm with a Rosary at 7pm, Sunday, September 15 at Whitney & Murphy Funeral Home, 4800 E. Indian School Road, Phoenix.  Funeral Mass will be held at 10am, Monday, September 16 at St. Theresa Catholic Church, 5045 E. Thomas Road, Phoenix.  Interment will follow at St. Francis Catholic Cemetery.  In lieu of flowers, please make a donation to Hospice of the Valley, 1510 E. Flower Street, Phoenix, AZ 85014.

Offer Hugs From Home Condolence for the family of CASCIATO, JOHN LOUIS