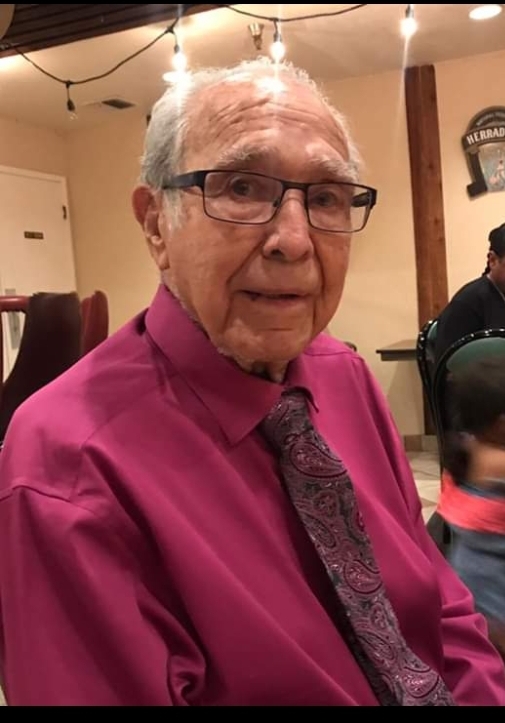 How do you sum up a life that spanned almost a century … nearly 100 orbits around the sun?!? Its milestones are the years and the decades. Its monuments are the family, loved ones and friends … Those that have passed and those that survive. Its impact is what has been felt and what we have yet to feel. It is a life to celebrate.
Feliciano “Chano” Castellanos was born July 7th, 1921 in a tent in the southwest corner of Arizona in an unincorporated community called Dos Cabezas, Arizona. Chano was the first-born son of Maria Luisa and Feliciano Castellanos Sr., and though he was born in Dos Cabezas he was raised in Globe, Arizona. His beginnings were very humble. Raised to work hard, he left school in the 6th grade to help his family. In the Globe/Miami area he met the love of his life, Virginia Rodriguez, the woman who would become his wife. Their 56-year union was, to many, a picture of eternal love. Even late in life some described them as teenagers in love. Together, they raised three children. To add to his life of accomplishments, during World War II he was drafted into the United States Army and served as a medic in the Pacific Theatre rising to the rank of Sergeant. A lifelong learner, he became a carpenter and added to the home he and his family lived in. He worked as a carpenter on numerous buildings in downtown Phoenix. He even made furniture for his great granddaughter’s bedroom. He helped to build a restaurant with my grandmother’s family. The restaurant was named Los Compadres because of the familial connection that they shared. He was also through the year’s part owner of DNB Construction Company. A few years later he was hired by APS where he proudly worked until his retirement.
But to those who had the privilege of meeting him, his joy … his Zen place … was his garden. Whether or not a plant or flower was
indigenous to Arizona he could grow it. People would bring him plants that were essentially “done” … and he would resurrect them to health. In fact, his green thumb was well known … he planted many of the trees on his block. On July 6th of this year, Chano, at Casa Reynoso in Tempe, celebrated his 98th birthday surrounded by family and friends that he adored. On Saturday, July 27th, at 2:45 a.m., while being cared for in his beloved home, he left this earthly life to meet our Lord and Savior, and to join Virginia, the love of his life. Chano is survived by his three children; Patricia Castellanos, Diane Castellanos (Rosemarie), Richard Castellanos … his grandchildren Danielle, Joshua (Vanessa), Corey and great grandchildren Isabella and Keegan. He also is survived by his three siblings Rosemary (Joe) Mancha, Ed (Hope) Castellanos, Ernie Castellanos. He leaves behind numerous nephews, nieces and cousins as well those who met him and were touched by him.
Join us as we mark the passing, and celebrate the life of Feliciano
“Chano” Castellanos … a life well-lived, and one of love, integrity, sincerity, bravery, and strength.
Visitation will be held on Monday, August 5, 2019 from 5:00 – 8:00 pm with a Rosary at 7:00 pm at Whitney & Murphy Funeral Home, 4800 E. Indian School Road, Phoenix. Funeral Mass will be celebrated Tuesday, August 6, 2019 at 10:00 am at St. Theresa Catholic Church, 5045 E. Thomas Road, Phoenix. Interment to follow at St. Francis Catholic Cemetery.

Offer Hugs From Home Condolence for the family of CASTELLANOS, JR., FELICIANO