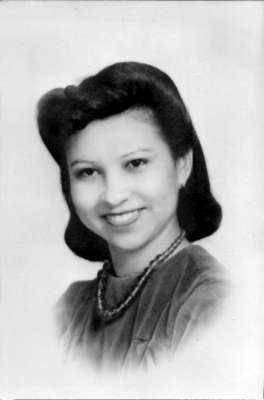 The gates of heaven opened wide as the saints of old joined the angelic hosts on May 23rd, 2015 to welcome our beloved Bertha Castillo into the heavenly kingdom of God. An Arizona Pioneer Native, Bertha was born in Florence, Arizona on August 14, 1914 to Florencio and Pauline Cruz. Orphaned at the age of 12, Bertha, with limited resources, learned the tactful art of resourcefulness. Using faith, perseverance, and a solid work ethic, Bertha survived the death of parents, World War I, the Great Depression, World War II, and the sudden death of her brother Alexander in 1956. With her two beloved sisters, Margaret and Mary by her side the three Cruz women overcame overwhelming obstacles to make an impactful mark on this world. Dancing her way through the Big Band Era, marrying her handsome, devoted husband, Carlos Castillo, as well as having her one and only child; Rita Marie, marked the colorful highlights of her life.   Bertha served as a waitress here in the valley till she was 80 years old. But retirement was not about to slow Bertha down. She then began her new adventures of traveling the world. She visited Chattanooga, Tennessee, Orlando, Florida, Lake Tahoe, San Diego, San Francisco, Texas, Japan, China, and Venezuela. The strong, faithful Catholic woman that Bertha was, left this world the day after the feast day of St. Rita, patron saint of impossible causes, and on the eve of the Feast of Pentecost; the powerful coming of the Holy Spirit. Those two days summed up Bertha’s life: believing for God to do the impossible, and living in the power of the Holy Spirit. Bertha is preceded in death and now reunited in heaven with those she deeply loved and missed:   Florencio and Pauline Cruz, Margaret McGan, Mary Aros, Alexander and Manuel Cruz and her beloved husband of 56 years; Carlos Castillo. She has left behind a loving family who wish to honor her life by living in the strength she imparted to them: Daughter Rita Marie, son-in-law David Hudgens, and grandchildren: Jordan (spouse Tiffany), Heather, Tressa, Rock and Allison as well as a beautiful great granddaughter: Kristine. Despite only having one child, Bertha deeply loved and cherished her 17 nephews and nieces and considered them her own.   Bertha will be remembered as a faithful spiritual warrior who embodied the qualities of strength, courage and determination. She fought the good fight, finished the race, kept the faith and has now received the crown of righteousness.   Visitation will be held from 5:00 – 8:00 PM with a Scripture Service at 7:00 PM, Monday, June 1st, 2015 at Whitney & Murphy Funeral Home, 4800 E. Indian School Road, Phoenix, AZ. Funeral Mass will be at 10:00 AM, Tuesday, June 2nd, 2015 at St. Theresa Catholic Church, 5045 E. Thomas Road, Phoenix, AZ. Interment will follow at St. Francis Catholic Cemetery Mausoleum, 2033 N. 48th Street, Phoenix, AZ.

Offer Hugs From Home Condolence for the family of CASTILLO, BERTHA