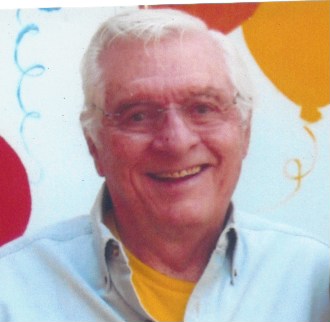 Thomas Anthony Cavanagh, 88 years young, peacefully passed away on December 22, 2018 at Hospice of the Valley surrounded by the sounds of Frank Sinatra, Dean Martin and Vickie Carr. He was born in Chicago on September 19, 1930 to Bert and Mary Cavanagh. He had three brothers, Harry Cavanagh, John Cavanagh and Eddie Cavanagh, and two sisters, Peggy Knoell and Mary Ann Mitcham. The Cavanagh clan moved to the Valley of the Sun in 1940 and made Phoenix their forever home.
Tom attended St. Francis Xavier elementary school and proudly attended St. Mary’s High School, a fact he frequently shared with anyone who asked. He went on to graduate from Arizona State University with a degree in Business Management. Upon graduation, he enlisted in the United States Air Force where he was stationed in Korea for four years. During his time there, he was the designated pilot for Syngman Rhee, President of South Korea. Tom flew many missions, many of which he was never permitted to speak about; he served his country with great devotion. While off duty, when he needed some extra spending money, he was the official typing teacher for anyone on the base. Tom truly was a multi-faceted, talented guy.
His love for flying continued after his service. He flew with his family, friends and co-workers. He flew dignitaries, such as senators, congressmen, and judges, to attend political functions all over the country. Whoever needed flight service, Tom was happy to oblige.
Upon returning home from Korea, he began his career in real estate. Hired as a salesman with Staggs Homes, in a very short time he became the Sales and Marketing manager. It was here that he truly found his place in the business world. After several successful years with the company, Tom went into business with his brother-in-law, Frank Knoell. Frank managed the Construction division and Tom managed the Sales and Marketing division. Together, with all of the talented and dedicated sales people and craftsmen, they built the legacy of Knoell Homes.
In the late 1970’s, Tom decided to go out on his own and open Tom Cavanagh & Co., successfully building semi-custom and custom homes in the Valley for over 20 years. He was a long-standing member of the Arizona Home Builders Association, having served as a board member for many years. He was a lifetime member of the Phoenix Thunderbirds; it was one of his greatest joys.
Tom was one of the original members of Arizona Country Club, a place that was very special to him. It was here that Tom became a proficient tennis player and golfer, something he often shared with those that asked, and even those that didn’t.

He was a genuinely charitable and generous person, but in a very quiet and unpretentious way. Catholic charities, Sisters of the Poor, Father Wasson & NPH, Boys & Girls Club of Phoenix were a few of his favorites.
Tom leaves behind his loving family; his wife of 64 years, Cathie Cavanagh and his four remaining children, Laurie Helgeson (Grant), Colleen McGuire (David), Meg Murphy (Brian) and Tim Cavanagh (fiancé Vivian) and many grandchildren and great grandchildren. Gone before him are his mother and father, his three brothers and his eldest son, Eddie, who passed away in March 1979.
“May the road rise up to meet you. May the wind be always at your back. May the sun shine warm upon your face and the rains fall soft upon your fields. And until we meet again, May God hold you in the palm of His Hand”.

In lieu of flowers, contributions may be made in his memory to your favorite charity.

Offer Hugs From Home Condolence for the family of CAVANAGH, THOMAS ANTHONY