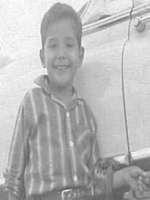 was born April 2, 1952 at Phoenix Memorial and died in his home December 20, 2010. TC was proud to have grown up in Sunnyslope. His strong work ethic and big heart made him a legend in the moving and shipping business. TC started out as a humble truck driver and over his 40 year career, eventually became the greatest salesman of all time. He is survived by his sons Teddy (Evann) and Bobby “the Niño”, sisters Rebecca and Michele, brother Soni, nieces Portia, Kim and Joni, grandson Ronan and former wife, Pamela, the mother of his children. He was preceded in death by his parents, Fred and Vivian, and brother Bobby. To know him was to love him. TC loved riding his Harley and getting together for laughs with friends and family. Memorial Service will be held on Monday, December 27th at 1:00 p.m. at Whitney & Murphy Funeral Home, 4800 E. Indian School Road, Phoenix, Arizona. Do not go gentle into that good night. Rage, rage against the dying of the light.

Offer Hugs From Home Condolence for the family of CERVANTEZ, TED “TC”