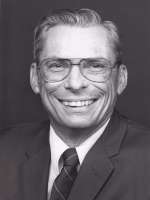 Stephen “Steve” Martin Chalmers died peacefully at Huger Mercy Living Center in Phoenix, Arizona on December 14, 2012.  Steve was born in Lansing, Michigan on January 27, 1927.  His family later moved to Phoenix, Arizona where his Dad taught industrial arts at the Phoenix Indian School.  He attended North High School for one year before moving back to Alexandria, Virginia where he attended George Washington High School.  After graduating in 1944, he enrolled in the University of Maryland to study engineering and played both football and basketball. He enlisted in the United States Navy on January 25, 1945.  He became a Seaman First Class and graduated from the Radio Material School as an Electronic Technician’s Mate.  He was stationed at Bellevue, Maryland and the Great Lakes Training Station in Chicago, Illinois.  He was honorably discharged on August 21, 1946. After the war, he enrolled at the University of Arizona (UofA) where he played football 1946 and basketball in the 1946 and 1947.  The highlights of his UofA athletic career were scoring a touchdown against Arizona State College (UofA won) and playing on the same basketball team as Moe Udall.  He was also a founding member of Gamma Epsilon of Kappa Alpha Order at UofA.  He graduated in 1949 with a Bachelor’s of Science in Electrical Engineering (EE) and later achieved his Masters in EE from UofA in 1957. From 1949 to 1989 Steve enjoyed a very distinguished career at Salt River Project (SRP).  He served as Director of Engineering, Assistant Chief Engineer, Manager of Operations Analysis, Design Engineer and Field Engineer.  He was active professionally as a member of the National Society of Professional Engineers and Institute of Electrical Electronics Engineers (IEEE).  He was also chairman and representative of the North American Electric Reliability Council (NERC). After SRP Steve pursued his passion of working to promote, develop, engineer and apply photovoltaic (solar cell) systems and standards.  He was co-founder and Executive Director of PowerMark, which designed a photovoltaic module component certification program.   In 2001, he was one of the first to install a home-based solar panel SRP co-generation system in Phoenix.  He served on the Arizona Energy Office Solar Energy Advisory Council.  He also served on IEEE and International Electrotechnical Commission PV standards committees.

Steve was an avid outdoorsman, enjoying snow and water skiing, backpacking, biking, hiking, boating, hunting, fishing and traveling the world (he and his wife Jane traveled to every continent).  He also loved to work on cars. He was a volunteer leader for the Boy Scouts of America, for both their Explorer and Scouting programs.  He was a member of Phoenix East Rotary Club for over 23 years.   He was a devoted member of the First Congregational Church in downtown Phoenix for over 63 years.  Steve met his future wife, Jane Harvey, at First Church.  They were married in 1953 and celebrated their 59th wedding anniversary in August.  They have four children and eight grandchildren. Steve is preceded in death by his parents, Dwight and Velma Chalmers, and sisters Carly Burns and Hester Van Dissen.  Steve is survived by his wife, Jane, and sons Craig (Trina), Mark (Robi), and Seth (Susan), and daughter Clare (Craig Angell).  He has eight grandchildren: Christine, Evan, Devan, Casie, Eric, Kyle, and Scott and Kjersten Angell.  A service to celebrate Steve’s life will be held at the Project Employees Recreational Association (PERA) Club on Wednesday, January 2, 2013 at 11 a.m. outdoors (weather permitting) or in the Pavilion.  A reception will follow in the Clubhouse.  PERA is located at 1 East Continental in north Tempe (south of McDowell Rd. off of 68th St).  Steve will be privately interred at the National Memorial Cemetery of Arizona.  In lieu of flowers, the family suggests donations be sent in Steve’s name to Huger Mercy Living Center, 2345 W. Orangewood Ave., Phoenix, AZ 85021 or the Alzheimer’s Association, 1028 E. McDowell Rd., Phoenix, AZ 85006. 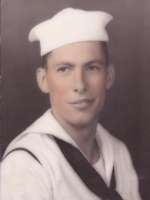 Offer Hugs From Home Condolence for the family of CHALMERS, STEPHEN M.