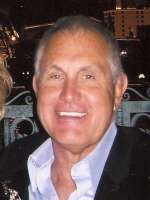 It is with a deep sense of loss that we announce the death of Pete A. Chapas, Jr.

Pete died as a result of appendiceal cancer. He fought this deadly disease over a three year period, won many battles against this insidious disease, but ultimately lost the war.

Pete was born in East Gary, Indiana to Pauline and Pete Sr. in 1947. Upon graduation from high school, he moved to Arizona to attend Arizona State University. After attending ASU, he enlisted in the US Army where he served for 4 years. He continued his service to his country in both the Army Reserves and the US Air Force Reserves Office of Special Investigations from which he retired after twenty four years.

Pete served with the Tempe Police Department as a Detective, retiring after twenty years of service. He was a dedicated law enforcement professional who had a passion for his work and displayed a work ethic that was second to none. He was devoted, tough and respected by most people he came in contact with.
Pete was a Certified Fraud Examiner and Certified Protection Professional as well as a member of the American Society for Industrial Security and the International Association of Credit Card Investigators.

Upon completion of his successful career in law enforcement, he went to work for Salt River Project, where he worked as their Senior Investigator for several years prior to his promotion to Security Director. In his position he managed complex security issues as well as the protection of people, property and assets. His competencies in the area of security solutions and best business practices only enhanced his reputation as a leader in his industry. He loved his work and the company he worked for. He retired in 2009 as a result of this dreadful disease.

He is preceded in death by his loving parents, Pete Sr. and Pauline as well as his beloved father-in-law Jack McMahon.

Pete never lost sight of those who stood by him in this battle and his wife will never forget the care, concern and unbelievable treatment administered by Pete’s medical team. Many thanks go to the medical professionals including his surgeon Dr. Peter Ferrara, his physician Dr. Donald Opila and the medical staff at TGen Clinical Research, Drs. Ramesh Ramanathan and Cathy Mast and Pete’s team, Monica, Dawn, Patti, Brian, Lana, Jody, Vicki, Maria, Christine and Lynn. Because of their care, Pete was able to survive longer than most who have this disease. He adored them and was thankful for every effort put forth on his behalf.

Pete’s final days were spent under the care of Hospice of the Valley. The care that was afforded to Pete was beyond compare. His team, led by Kim, was so amazing in their efforts to support him in his final days and to allow him to leave this world with the same grace and dignity with which he lived.

Offer Hugs From Home Condolence for the family of CHAPAS, PETE A., JR