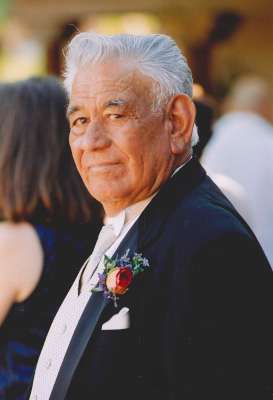 91½, of Phoenix, passed away on April 15, 2014.  He served in WWII and after that he began his journey with the love of his life Esther.  He was a union carpenter by trade and retired from McCarthy Construction in 1987.

He is survived by his loving wife Esther, of 67 years, 5 daughters and 4 sons; Bobbie, Cathy, Anna (Ben), Diana, Angela (Woody), David (Kathy), Michael (Norma), Robert (Lupe) and George.  Ray is preceded in death by his son Jimmy Ray. He is also survived by his 2 brothers and 2 sisters in California, 18 grandchildren, 17 great-grandchildren and 1 great, great-grandchild.  Visitation will be held from 9:30-10:30am, Rosary will be at 10:30am and Funeral Mass at 11:00am, Friday, April 25, 2014 at Immaculate Heart of Mary Catholic Church, 909 E. Washington Street, Phoenix.  Interment will follow at St. Francis Catholic Cemetery.

Offer Hugs From Home Condolence for the family of CHAVEZ, RAY PAZ