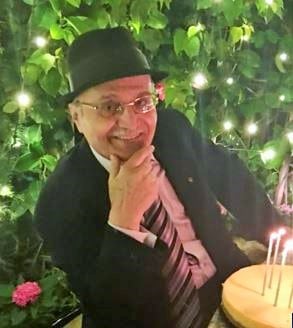 Peter Joseph Chedid passed away on April 16, 2022 at the age of 84. He died peacefully surrounded by family. Peter was born on July 5, 1937, in Kherbet Kanafar, Lebanon, to his parents, Youssef Chedid and Marie Chedid. His father, Youssef, was a Maronite Catholic priest who served the West Bekaa community where Peter grew up.

Peter immigrated from Lebanon to the United States in 1970 and lived in New Brunswick, New Jersey, for 24 years. He and his wife, Nawal, worked tirelessly to establish a new life in the United States, and to help family and friends fleeing the Lebanese civil war to do the same. In 1994, Peter and Nawal sought to explore the Western United States and moved to Phoenix, Arizona, where they have resided for the past 28 years.

Deeply respectful of and inspired by the American Dream, Peter’s entrepreneurial spirit was ever present. He found success in multiple business endeavors, but the nearest and dearest to his heart was Char’s Has the Blues in Phoenix. He loved the diversity and soulfulness of the Char’s community and knowing that “his place” brought joy to so many people. His warmth, kindness, and sense of humor – together with his signature hat and suspenders worn over a dress shirt – made him one-of-a-kind.

Nothing made Peter more proud than his family whom he and Nawal raised to work hard, to persevere, and to “dream big.” Although he spent the majority of his adult life in the United States, his deep love of Lebanon was unwavering, and he continued to spend many summers there over the years, visiting with his brothers Henry and George and their families, and with his old friends.

Peter was devoutly religious and a parishioner at St. Sharbel’s in New Jersey and then at St. Joseph’s in Phoenix. He was preceded in death by his brothers John Chedid and George Chedid. He is survived by Nawal, to whom he was married for 57 years; by his children – Henry Chedid, Amine Chedid and his wife Joyce of Hillsborough, NJ, Maria Chedid and her husband Brian of Berkeley, CA, Bashir Chedid of Phoenix, AZ, Peter Michael Chedid and his partner Susan of Long Branch, NJ, Jacqueline Georges and her husband Joseph of Monrovia, CA; by his grandchildren Alexandra, Lenah, Kyle, Jason, Mireille and Leila, and by his two brothers – Henry Chedid of Lebanon and Paul Chedid of Florida.

Offer Hugs From Home Condolence for the family of CHEDID, PETER JOSEPH