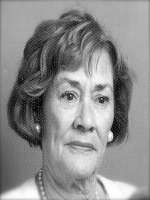 Born on September 25, 1921, to her mother Hazel Quinn in McGregor, MN., Pat grew up in Minneapolis with her mother and brother Thomas, both predeceased.

She later met and married David O. Chelgren and started her family. The couple moved first to Connecticut and then St. Louis, before settling in Scottsdale. Known to many as simply “Granny Pat,” she was a loving and supportive mother, grandmother and great-grandmother as well as an active parishioner for many years at St. Theresa Catholic Church.

In addition to being a wife and mother, Pat was also a successful business woman. Without any formal training, she crafted a career as an interior designer and later owner of the Dinette Shop on North Scottsdale Road.

Blessed with a quick wit and good sense of humor, Pat loved to cook and entertain and she will be remembered for the panache and style which she brought to even the simplest of occasions. There was no meal too small or snack so light that Pat couldn’t turn it into a feast with her own special and creative touches. Her children were often surprised by a special treat or note of encouragement tucked inside their brown bag school lunches. She was famous for her sweet tooth and love of chocolate and her family learned that a meal was never over until you had dessert.

She enjoyed films, theatre and music and considered it part of her grandmotherly duties and one of life’s simple joys to sit with a grandchild or great-grandchild and watch the Lawrence Welk Show.

To those lucky people whose lives she touched, Pat will always be remembered as a gracious and compassionate person and loving soul. She was generous to a fault and would gladly give her last dollar rather than see her family or children go without. Many described her simply as a truly “special” person.

The quality of her life can best be judged by the caliber of the family members and friends she leaves behind. She is survived by her four children, David, Jon, Susan and Timothy, 11 grandchildren and five great-grandchildren.

Offer Hugs From Home Condolence for the family of CHELGREN, PATRICIA ANN