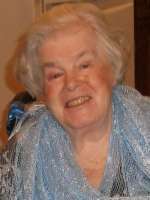 February 1, 1923-April 26, 2011
Christy, Sister Mary Rose, RSM – in Phoenix on April 26, 2011 at the age of 88. Mary Ruth Christy, born in Pittsburgh, PA, was the second of five girls born to Joseph A. Christy and Henrietta Wise. She grew up during the depression in a strongly Catholic family and after graduating from Swissvale High School enrolled in the Pittsburgh Hospital School of Nursing, receiving her R.N. in 1945. In 1946 she moved to San Francisco and joined the nursing staff at St. Mary’s Medical Center, administered by the Sisters of Mercy. On July 1, 1947 she entered the Sisters of Mercy in Burlingame, CA, taking the religious name of Sister Mary Rose. After professing her vows in January of 1950, Sister Mary Rose ministered as a nursing supervisor at St. Mary’s Hospital for three years before being transferred to St. John’s Medical Center in Oxnard, CA, where she continued as nursing supervisor for the next eleven years. Sister Mary Rose was on medical leave in 1964 and 1965 with severe back problems. During a lengthy recuperation from surgery she became interested in reading history and articles and books about political and social issues, and spent a good amount of time writing “letters to the editor” of various newspapers and periodicals . As a result of this experience, when Sister became a member of St. Joseph’s Hospital Mercy Community in Phoenix in June of 1965 she began several years of community organizing and political activity on behalf of Arizona’s poor and marginalized as Director of Community Services at the hospital. At the same time Sister was completing courses toward an M.A. in political science at Arizona State University which was awarded in 1974. She was a member of several boards of community health services, actively trying to improve the health services for the disadvantaged. In 1975 Sister Mary Rose became the executive director of the Affiliation of Arizona Indian Centers, Inc. where she worked to improve services to the Native Americans of Arizona. In 1980 she moved to Los Angeles to direct the Billy Smith Institute for Career and Vocational Training, a national program for Native American youth. Her community of the Sisters of Mercy called on Sister Mary Rose in 1985 to put her talents to work as the first development director for the Burlingame Sisters of Mercy. For four years she worked to maintain the financial support of the sisters and their works. In 1990 while taking a much needed sabbatical Sister saw a television special on the deplorable conditions of orphanages in Romania. Offering her services to a Dutch group trying to alleviate the conditions, she moved to Sibiu, Romania, in that same year and began working to change the conditions in the local orphanages. This work grew to include other social services to help low income families keep their children instead of sending them to the orphanages because they couldn’t support them. Over the next twelve years this work developed into the social services organization ARAPAMESU (Romanian American Association for the Promotion of Health, Education and Human Services). In 2003 failing health made it necessary for Sister Mary Rose to return to the retirement center for the sisters in Burlingame, CA where she lived for four years, before moving to the Huger Mercy Living Center in Phoenix, where she lived out her last years. She will be remembered for her great energy and determination in carrying out the works of mercy, and alleviating the sufferings of the disadvantaged. Sister Mary Rose is survived by her sisters Henrietta Speer and Pat Rohar and their families and her loving community of the Sisters of Mercy. Services will be held on Saturday, April 30, 2011 at Huger Mercy Living Center, 2345 W. Orangewood Drive, Phoenix, Az 85021. Visitors may call after 8:30 a.m. The Rosary will be prayed at 9:30 a.m. and a Mass of Christian Burial will be celebrated at 10:00 a.m. Memorial gifts may be made to the Sisters of Mercy, 2300 Adeline Drive, Burlingame, Ca 94010 or Huger Mercy Living Center, 2345 W. Orangewood Avenue, Phoenix, AZ, 85021 or to ARAPEMESU (c/o Sisters of Mercy, 2300 Adeline Drive, Burlingame, CA 94010).