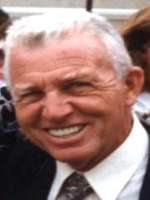 A.A. “Tom” Ciani, born April 1, 1924 in Freedom, PA, passed away on Feb. 29, 2012. Tom is preceded in death by his beloved wife of 55 years, Alice Mae; survived by his children, Michael (Michele), Kimberly Ann (Mark) Van Wassenhove, Kyle Emily (Douglas) Cutter and John Ubidio; grandchildren, Jonathon Ciani, Jacob and Claire VanWassenhove, and Margaret Cutter; siblings, Lorida Harvey, Eddie, and Dennis (Linda) and many nieces and nephews. He was a WWII Navy veteran and received a BS in Communications from Boston University, as well as a Masters of Special Education from Pitt. His first teaching job was at Ft. Defiance, AZ on the Navajo reservation. Upon moving to Phoenix in 1954, he taught in the Creighton School District and Cordova Elementary where he taught Special Ed and Physical Ed for 30 years. A devout Catholic, Tom was a parishioner of St. Thomas the Apostle since 1954 where he ushered for many years. Tom officiated AIA basketball and volleyball for 25 years. For 42 years, Tom was dedicated to St. Mary’s High School athletics, and was affectionately known as “The Voice of St. Mary’s.” He was closely involved with St. Mary’s Girls basketball for 32 years and was thrilled to keep score for the 2012 State Championship game that capped off their undefeated season. Tom was a dedicated husband, father, and grandfather who always provided for his family and will be dearly missed. Visitation will be held from 5-8pm with a Rosary at 7pm, Sunday, March 4, at Whitney & Murphy Funeral Home, 4800 E. Indian School, Phoenix. Funeral Mass will be at 10:30am, Monday, March 5, at St. Thomas the Apostle Catholic Church, 2312 E. Campbell, Phoenix. Interment will follow at St. Francis Catholic Cemetery. In lieu of flowers, donations may be made to the Saint Mary’s Catholic High School (http://www.smknights.com/waystogive.htm).