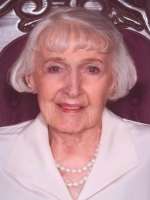 Vibrant to the end, and after a long and full life, Doreen Eleanor Clancy died peacefully on January 1, 2011, surrounded by her loving family. She was born on August 18, 1913, in Regina, Saskatchewan, Canada, to George and Mary Eacrett. Doreen was an intelligent and deeply religious woman. Her values, unbiased generosity and immense love and devotion to her family served as an example to those who knew her. She married George Victor Clancy in 1942. They immigrated to the United States with their four children and settled in Phoenix in 1952. Doreen’s marriage to George ended after only 16 years when he passed away on October 1, 1958, following a long illness.
Doreen was an active member of St. Francis Xavier Parish for more than forty years and was a member of its Altar Guild and Sodality. She also volunteered for the Arizona Museum of History. She is survived by her four children and their spouses: Charles Clancy and his wife Joan; George Clancy and his wife Cherie; Angela Markham and her husband Michael, and Cheryl Clancy whose husband is Ronald Spears. Doreen is also survived by nine wonderful grandchildren: Cherie Pobiak (Brandon) Jennifer Gough (Andrew); JiJi Beach (Jeff); Michael Markham Jr. (Alicia); Ashley Born (Brandon); Autumn Nichols (Jason); Heather Markham, Taylor Spears and Dominique Clancy. Her great-grandchildren are: Shannon, Delaney, Andrew, Blake, Trey, Lauren, Madeline, Kaitlyn, Victoria, and, Garrett. A private funeral Mass was held at the Brophy Chapel and she was buried in St. Francis Cemetery. Suggestions for donations in her memory include the Fanconi Anemia Research Fund (www.fanconi.org), the Desert Southwest Chapter of the Juvenile Diabetes Foundation (www.jdrf.org) and, Hospice of the Valley (www.hov.org).

Offer Hugs From Home Condolence for the family of CLANCY, DOREEN ELEANOR